Unusual, that's what she was....not to mention, frisky too. Deadly combination. To add to that, she was just so beautiful with  long copper locks that would frame her sharp face, those liquid brown eyes which would make any one who looked into them quickly melt. She was friendly and fun. Full of energy and vigour. What was amusing were her quirks: the hair dryer trick was especially ridiculous. Every time we wanted a little laugh or wanted to scare her, out came the hairdryer and mission accomplished! She would run helter-skelter, looking for a "safe" spot, away from the line of the dryer fire! Ditto with a rolling suitcase  that would set her off similarly. What a gal!

That's our Kiara for you, our wonderful Irish Setter who passed away this morning.

When did she go from A-OK to Z-MINUS?

I don't know, it was all just too sudden. And perhaps I wasn't intuitive enough or observant enough. But her bodily change happened literally over night. There were signs though....signs that I didn't understand? But it all started around 6 weeks ago. The entire house was empty as we took off for a family holiday and she was left with the staff at home and a whole army of workers and masons who were working at renovations in the house. I got back a few days earlier to the distressed staff; complaining that Kiara hadn't eaten any thing in 3 days time. What ever little she had consumed, came out and she had spent the days lying listlessly in a tight ball in a corner of the house, ocassionally perking up for the doorbell. I scratched her ears and spoke to her telling her, we were home and she wasn't alone and she should eat. Et voila! My little pep talk seemed to have worked and she hungrily ate her dinner that evening. I promptly went back to my world, thinking it was just a case of loneliness. Besides, it was true that in the past year or so, Ky had slowed down considerably and wasnt nearly as frisky and foot loose as she used to be. She did greet unsuspecting strangers with her usual inappropriateness and she did seem to enjoy her daily walks down stairs. But it was noted that our bullet-like Ky had slowed down....at home we called it as her "mellowing" down.

Well, her case got better marginally, and we suspected she was suffering from a bout of food poisoning. Her nose and mouth was often caught in all the wrong places, eating all the wrong things and she had a history of a weak constitutiton. But it was nothing of consequence and poor Ky was always being scolded for "making a mess"! In any case, despite my mother's return (Ky had an inexplicable obsession for my mum!), little Ky didn't get much better. What would throw me off-track would be the inconsistency of her state - there would be days where she was perfectly normal and then again days where she wouldn't move from her spot. She was shrinking too, getting more and more frail. Again, we discounted this to her aging. The vet didn't help us either as he figured it was a stomach infection, consequent bloof reports suggested jaundice so we started medication to address that ailment.

The case of giving her davaa was a tough one. Nearly a Hurculean task in fact as she was keep her jaws locked, teeth gritted and body rigid, resisting all our innovative efforts to give her the medication. No tricks worked though and the times we would meet with success, we would soon find a little puddle of the tonic in one of her "secret" corners.....
It was getting increasingly difficult to deal with her obstinance. After 4 weeks of this nonsese, I was keen to investigate her further and got a sonography. I could sense something awfully wrong by looking at the pictures, but I put away those thoughts. But too late - the doctor confirmed within moments that our Ky was suffering from the C-word. And had lost too much of physical strength to fight it.

Well, nothing really. That was 2 weeks ago, and here I am today, writing about the Lady who Lived.

There is an eerie emptiness in the house. I keep hearing her in my head, seeing her from the corner of my eye. These last few weeks took our relationship to another level. For the past 3 years, I had felt a distance in our bond, I felt put off by her marginalised affection towards me and thought Ky was happier in the company of all the new people in her life ( the girls at home, her walker, Sanjay the Shampoo guy etc...). They did most of the hands on work with her and t was only natural that she cared for them. But in these 4 weeks, I worked hard. I worked with all my might to try and fix her, fix us.............

For all of those who came to our home, or knows any of us, knows Ky. How can they not, she didn't give them a chance to "get away"! Even the most timid, dog-fearing of them all, grew accustomed to her. She touched so many peoples' lives in strange and sensitive ways.The reassurance of ringing the bell only to be greeted by her enthusiastic, flying jump hello, the thumping of her tail as we would go across to meet her, or the feeling of her warm body going up and down as she curled at your feet, under the table or the tingly sensation when she would lick your tears when you were crying.

She was sensitive but in an unconventional way. And we got that. She wasn't like other dogs...and we wouldnt ever have wanted her to be. She came from Goa and we chose her from a litter of 10 puppies, because she was the puppy with the most amount of energy!

I think I speak for all us in the family when I say that she will be remembered for her indomitable spirit and her unusualness..We wish her a happy stay in the Heaven Hotel. I hope she gets to eat all the bikkis in the world and enjoys countless, joyful hours playing fetch with her spit-infused old toy.

But most of all I hope that Ky had as happy a time as we did with her in 51 A. She taught us a lot about life and love, lessons that we will never forget so thank you very much for coming to our lives Kiara. 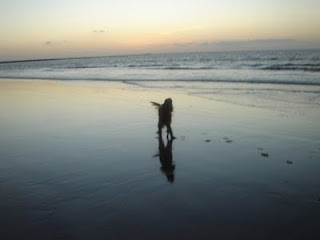