Half a year down: Is your cup half full or half empty?

Well, this cutie-pie sure has his cup half full - Atta boy! 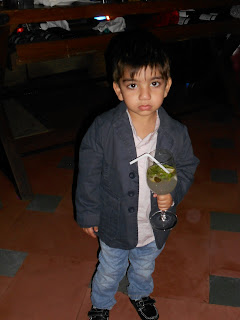 So for all the half-empty cup holders, let's learn a trick or two from his drinking style...
But seriously, can any one help me track how this year has just whizzed by in a flash? I remember the new year day with crystal-clarity (pun intended: I froze my bones dry and got my obliging mother to tag along for the ice-ride in Paris last winter and we ushered in the new-years with frost bites, stuck in a far-away garden with no cabs to take us back into the city! Brrr...)
Technically, a lot has happened in these dizzying past 6 months -but if I take a moment to recall this time, I literally draw a blank. We live in a world which is moving so very fast that I am afraid we are quickly failing to savour special moments in life. Or let me put it this way, we live in an enhanced world; a world that each of us knowingly or un-knowingly draws a lot from. Not only are we expected to perform but we expect to get a lot from the world too. Thus raising the average standards we set for ourselves and those around us. In this nutty equation of improving our lives (or so we say), I feel we are losing out on many simple basics. Basics - such as family, health, the arts, the outdoors, a nice cup of tea, an evening stroll....All of these simple acts have to be enhanced. For example,nowadays, we don't just go to a concert, we go to a stage-performance. The show is rated by the outfits, the makeup, the dance, the lighting effects and various other elements of the super-natural. Least attention is paid to the actual singing or musical talent of the performers!
2011 was supposed to be a great year for every one in general. As opposed to 2010; which was marked by "predicted" disasters, 2011 was/is supposed to be a relatively trouble-free year. But in these few months, history has been created and destroyed in so many significant places all over the world. From the ongoing Libyan crisis, the Egyptian uprising, the alleged murder of Osama Bin Laden, The Japanese tsunami and nuclear crisis, the Royal wedding, the iPad revolution,the election of the first female Thai President....one could go on and on. Every morning we awake to a barrage of terrible news and a heavier barrage of "vital information" that our minds ought to remember for a host of reasons (to have conversation, to make smart jokes, to remain relevant, and most importantly, to manipulate to one's own personal advantage).
For most of us, all this goes into one ear and comes out of the other, for some - a little gets processed and for the least, some information is retained.
So in all this keeping up, we are keeping out precious memories that no iPhone, blackberry, youtube or facebook can preserve. At the end of the day, only that remains which is retained.
So my wish for myself for the following 6 months is to rewind and reflect...I am going to plug myself in to the charging socket before the batteries die out.
Posted by Arundhati at 13:33