Fresh....................is not the word I could use to describe my sentiments after watching Delhi Belly last night in a completely booked cinema, second week riding high. I should have taken a pair of ear-plugs to sound-proof myself against the wretched, noisy, loud and exaggerated toilet "sounds" that form almost a background bass beat to the entire movie. That grossness aside, I enjoyed the movie immensely.

I liberally give the movie a score of 4.5/5; with the highest rating going to the excellent script. The entire cast was fabulously well-cast and delivered on-screen. The only glaring irregularity I found was the horrendous, hole the 3 leading boys lived in. Even the poorest of our poor live in better maintained slums so it is highly unlikely that 3 highly educated, seemingly decent (although, Arup's back ground maybe questionable) boys live in a sub-standard, un-hygenic, disintegrating apartment. Given that this particular premises played a very pivotal role in the entire movie, I felt the lack of conviction that these 3 struggling professionals would ever choose this dump; no matter how grave their personal circumstance.

Vijay Raaz was terrifically styled and all the scenes with him, his goon like subs and Vladimir were tight. The detail of throwing in an English couple who find themselves in the thick of things was rather smart. It also threw light into the plight of unsuspecting travellers when they visite  India and when their trips go from the beautiful to the bizarre! Moving on to the 3 Female leads of the movie - Shehnaz, Poorna and Anusha - who held their own.

I knew Imran Khan could act and was a very competent actor, but to think him and the rest of the cast floated a movie speaking in English 95% of the time, I thought deserved a special mention. The best part all of them were so natutral and normal; unlike Ash and friends a la "Pride and Prejudice" who narrated their dialogues as though they were in a school elocution or diction class. 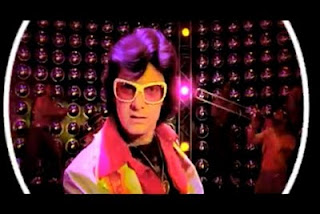 Interspersed with timely, witty tracks, the movie made a quick watch. The pace was good, the script was excellent, performances were original and the ending was just superlative and I'm not referring to the Poorna-Imran snogathon, I'm referring to the brilliant end-credits track. It was so utterly brilliant because of Aamir's "surprise" performance and his glorious chest hair! I left the movie dancing to the beats of i hate you (like  I love you) feeling absolutely jhakaas!


If you havent watched it yet, I say Bhaag bhaag DK Bose, DK Bose ;)
Posted by Arundhati at 18:34