It isn't called a Back Up for nothing

Boo! was what we got, a Boo! Hoo! is what we did post our failed mission to Hakkasan a few nights ago...

6 die-hard Hakkasan fanatics set forth from town to make it for an 8pm reservation at the restaurant.
Arrived and seated, we had already discussed the menu and what we would order the entire car journey through and were in attack mode as soon as we got there.Based on feedback from our friends and families that had already been there, we knew what was exorbitantly expensive and could be skipped! Luckily it happened to be a dry day and we were spared from ordering alcoholic bevvies.
Post the rapid-fire ordering (unfortunately the crispy duck salad wasn't available), we begun to take in our current surroundings and just as we noticed the interesting lighting effect of water ripples created on the ceiling, we found ourselves enveloped in utter darkness.

A few moments of hasty scuffling and confused whispers later, a few attendants brought little tea light candles to our table along with the 2 appetisers we had asked for. (The vegetarian lettuce wrap was yum but I think Royal China still scores higher, and the Enokoi mushroom steamed dimsums were a bit strange and "besan" like). In any case, we greedily dug in despite the lack of light.

The 2 starters were over and still no light.Hmmmm, even the couple on the table on our right who up until then seemed to be enjoying their spontaneous candle-light dinner, looked a bit concerned. When we demanded the waiter attending to our table to give us an idea on when to expect the electricity to come back, he confidently said, "Ma'am there is a power cut everywhere, on this street, actually around the whole of Bombay!" Utter nonsense! The manager then came up and went from table to table explaining that the technicians were working on fixing the fault and would need some time. We felt a little bad and decided to wait it out just a little while longer......after all, we hadn't crossed borders after a 2 hour journey to suffer defeat so quickly.

Thirty minutes later, there seemed to be no light at the end of this tunnel (metaphorically and literally speaking!); so we marched out. As a matter of courtesy, we did ask for the bill, but a quick group-chat ealier, we had decided that there was no chance this experience warranted a bill.
When we go to the entrance, we say the entire street was brightly lit, as was the bank in the very same building. How come such a highly-acclaimed restaurant, newly opened hot-spot, not have an efficient backup generator?

Devastated and disappointed, we walked into the safest and closest bet - good ol' RC. (The logic being that we had already started with Asian fare!)

As standard as the meal there was, we all pondered on how fresh the food we had had, really was since it arrived within moments of our ordering it. Dim sums, sure they might be steaming in the kitchen and are then just placed into the baskets for serving....I'll even say OK to the pre-prepared sauces (oyster, black bean etc), which can just be mixed with the meat/fish. But to get the crispy aromatic duck in a blink of an eye is not ideal at all!

After we hoovered the food, along with the addictive chilly sauce, one of the girls decided that we just had to get a single portion of the crispy honey noodles so that was ordered. What came to the table was this................. 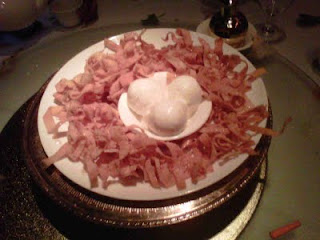 The portion was SO large that it made a perfect center piece on our soya-sauce stained table! it also made the perfect-ending to a completely ridiculous evening!