A respite for me (and you) from all the heavy posts I have been publishing the past few days.......

ATTENTION: MOVIE, SPOILER ALERT!
Perhaps it was the need of the hour and my state of mind at the time; but I thought Russel Brand in "Arthur" was just terrific. It was the first DVD that came in to my hand when I came home yesterday and was in "one of those moods", I popped it into the player rather indifferently, mostly hoping for some thing loud and noisy that would drown my thoughts.

But five minutes in and I was completely and entirely charmed by this fellow called Russel Brand. I know the guy is married to Kate Perry and they visited India and are a completely crazy couple. I figured he was on the fringes of celebrity-hood as a rocker or actor of some kind. That is about it.

So when the movie opens with his gummy mouth, bearing perfectly giant white teeth shining under the shiny, Batman mask, I thought to myself, "oh no, here is another tanker.....". Thought to soon, because a few moments later, I was hooked and how! 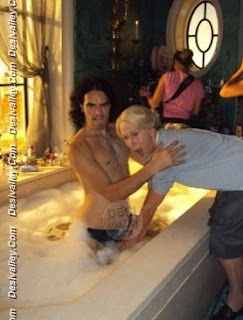 Sure, the premise is completely ridiculous by any standards - A 30-something multi million/billionaire whose wealth and sad upbringing has turned him into a ridiculous Jack-The-Pirate like Man/Child. He knows he has money but doesn't really know what it looks like (at some point of the movie he comments that the last time he had seen coins was when he was a baby!), but just spends it. Arthur Bach, heir apparent to the Bach Worldwide Enterprise is a man of no consequence. He does as and what he pleases, is rather delusional about the world he is a part of and is of course, a raging alcoholic, who passes his days in a giant stupor from one ridiculous antic to the next. Completely un-malicious and overly generous on the contrary, he is protected from trouble by his ever-watchful nanny, Hobson (played by Dame Helen Mirren) and his driver, Bitterman. Hobson has been with Arthur since he was a little boy and continues to take care of him.
Their bond is bizarre (what isn't in the movie!) - as she watches him bathe and strictly informs him to clean his *ahem* body parts properly lest some random girl from the previous night leaves him with some funky disease! Additionally  she reads him to sleep and is a permanent third party on any of his dates and trysts...
Whilst Arthur goes about Manhattan, throwing up dust along his path, his biological mother, the erstwhile Lillian, is fearing for the future of Bach Worldwide. The boy's antics get him in the news for all the wrong reasons every day and investors are not pleased. She calls her son and gives him the ultimatum: He can keep his inheritance as long as he marries the girl of his mum's choice or...............finds a decent corner on the curb.
And who has she picked for her only child? The self-made and super ambitious, Susan (Jennifer Garner), who is the daughter of a Pittsburgh construction mogul whom having made all the money, still have not got the prestige and esteem they crave so much for from society. The plan is simple: Susan marries Arthur and runs the company for him, thereby earning her place in the sun and Arthur remains on the payroll and can continue to enjoy unlimited hours with all his toys.

But poor-lil-rich boy bumps into a sweet-little-poor girl (Naomi from Queens) at the Grand Central Terminus in Manhattan and loses his heart. The two of them connect in a way so special, 'tis love. He learns about the "simple life" and does things he has never ever done before like walk along the street or eat spagetti o's etc etc! (Rather contrived, but anyway...!)
The boy is in love and the girl has a heart made of gold. He encourages her to pursue her talent as a writer/illustrator for children's novels. Meanwhile, crazy fiancée, Susan, doesn't want any one or any thing to come in the way of the most important business transaction of her life (the wedding) and takes to unusual tricks to get Arthur's attention. Arthur is lovelorn and its only Hobson who sees the light in his plight and tries pursuading Mother Bach to let him live on his own terms. All this sudden goodness from Hobson comes from the fact that she is terminally ill and has been hiding it from Arthur all along. Before she dies, she wants her Arthur to be handed over in hands as capable as hers and she understands that Naomi is the right one for the "job".

Alas, every fairy tale comes with a series of trials and tribulations...as does this. However, alls well that end's well...Arthur learns how to prepare a cuppa good ol' English tea, he joins the AA and gets sober, and in the end, he gets his girl!

With a couple of good scenes, goofy comedian Russel Brand, managed to make it in to my good books - I suspect it was the creative wardrobe he donned that did the trick. If her met Chuck Bass at the Upper West Side, it would be suspenders vs. bow ties!
Helen Mirren is good but in a wasted role. Jennifer Garner was very well-cast. I normally find her too un-feminine and horsey, and in the movie she plays the role of a very aggressive girl who rides horses!

Definitely not stuff great cinema is made up off, but if you have some time and need to de-brain, this makes a perfect watch!


And what NOT TO WATCH: "Textuality" starring John Lewis a.k.a Smith Jared, Samantha's dreamy boyfriend in Sex and the City. That man made all of us swoon and cry with his amazing looks and his soft character. If you want to remember him like that, then never watch this silly movie. Don't know what happened to him, but he has aged and is botox-ed out of control and his face doesn't move at all. He is too self-conscious and wooden.......aargh, I really wish I hadn't seen it!
Posted by Arundhati at 22:52