Yup, aargh! is what I felt whilst watching the much talked-about movie, "Aarakshan". I think the movie's timing has been perfect. With Independence Day and the Anna Hazare Fast, the youth and media all over the country have been galvanised into a heightened state of agitation. And so, the setting of "Aarakshan" (which means 'Reservation' for all those who didn't pick up!) goes very well with the general state of affairs in the country towards corruption and the like.

The root of all evil (and in our case, corruption) lies in the lack of education. Until and unless the masses of India get a decent, basic education and hence a fair shot at uplifting themselves from their present situation, the nation will continue to remain mired in the machinations of the Dark Forces (the politicians and governors of the State). Aarakshan deals with the problem of too many students chasing too few seats. Further from the few seats that exist, a large number is "reserved" for the Backward classes (BC and OBC), the Dalits.
This practice was started at the time of Baba Ambedkar, the Dalit Champ, who deemed it important at the time to give a push to the highly neglected and impoverished sections of society by introducing reserved places for them in places of sarkari education and employment.

So yes in principle, it was the appropriate action to take....circa 2011, it is a whole different story.

The problem is so deep in and so convuluted; making it difficult to describe. It has now come down to regular sections of society vs. the BC. With the reservation and quota policy, many (sllegedly) unmerited BC students get a spot (for higher education and/or jobs and/or miscellaneous opportunities) that ought to be had by a better performing regular person. The BC gets lucky by default. This has caused major friction in recent years, among students all over the country and the scene has gotten pretty ugly.

Where there's a mess, there is always an opportunity - Aha!! So, in the last 10 years, we have seen the growing rise and importance of the all-pervasive, "Coaching Classes" or "Tuitions" post school hours that kids are now slaves too. After receiving inadequate education from expensive private schools, students must supplement their studies with gruelling hours spent in coaching classes. What is ridiculous is that tuitions have become the norm (and not the other way round!) and the people who head these loot sessions, "promise" anxious parents and kids a ticket to success IF they enrol in the class.
Not only are the fees for such classes ridiculously high (it is perfectly reasonable to shell out Rs.1,500 an hour); but the classes are a waste of time with students receiving a heavy sheaf of papers ("notes") that are "simplifications" of the school/college prescribed text and additionally come with a ready made cheat sheet and finally, the most frequently asked questions from the past 10 years! The professors play a minor role, if at all, and are there to solve queries of often, indifferent students.

Cut back to Aarakshan and why I found most of it mind-numbingly boring! Sooo, for starters the film does have a pretty tight cast with Bachchan Saab playing the main protagonist of the Good Man. He is a pure educationist and his ideals are high. He is a Principal of a big/top private college and advanced mathematics seems to be his subject of expertise. He has taken over the reigns of the college management from its founder, the ever-lovely Hema ji. Under his guidance and vision, the college is free of all evil. He has a big heart and conducts coaching classes for the genuinely weak and needy students after hours at his home, free of cost of course. Pitching into his noble endeavours is his wife, Tanvi Azmi (wonderful screen presence and restrained performance) and his daughter, Deepika Padukone. One of Dr. Anand's (Bachchan Sr.) products is Dalit-gone-Professor, Saif Ali Khan (Deepak Kumar) who is also the object of Poorbi's (Dips) affection.

Now here is where I think the first problem sets in, Saif is no Dalit. With an honest and respectable performance by him, one still can't give him the benefit of convincingly looking like a Dalit villager.
No, I don't judge, but I am saying it like it is....Saif is much too distinguished to play such this particular role. Next in my list of complaints is the pace of the script and the lack of "defining moments" in the movie. With Manoj Bajpai (long time, no see!) as the corrupt acamedician who has heavy political cushioning (literally so with a ROUND Saurabh Shukla playing naughty Neta Baburao), Prof. Mithilesh Singh is on his way to building out the KK Coaching Classes empire around the region.
Then there is young blood, Sushant Sheth (Prateik in a completely futile role) as fellow college mate to Deepika aa well as being the son of wealthy college trust member. To add to an anyway weak performance, his role was completely unnecessary and served no purpose to the movie's basic storyline.

In a horrible twist of fate, village Guru, Dr. Anand is no longer Principal of the college. Too proud to stand for  unfairness and too straight to let his arm get twisted into doing anything against what he believed in, Dr.Anand and family find themselves homeless and powerless.

Post interval, the plot and story finally kick in. Issues of the Dalit lobby and its varying allegiances are introduced.But alas, it is much too late to get hold my attention!

Didn't your mother tell you that drinking a glass full of cow's milk will make you healthy and strong??? Well,
to cut a (veryyyy) long story short - destitute Dr. Anand and his ladies, find solace in the humble home of their neighbourhood tabela. Which is strategically located right across the street from his stolen home, which is now converted into a KK Coaching Class centre. Dr. Anand continues to do what he does best, that is to teach and empower. And as every good story goes, good prevails bad and everyone lives happily ever after...

With an incredible performance by Mr. Bachchan and notable performances by several members of the supporting cast, the movie ought to have been much better. It should have had the same impact on the audience. The subject is very relevant and as mentioned in the beginning, the movie also enjoyed incredible national sentiment. But on me, it fell FLAT. 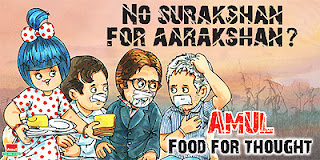