I have been suffering from a case of itchy fingers and I believe the only remedy for it is to post a new entry! I cant believe that I havent written in such a long time...well, I have lots to share. This is the first of a few, short entries.... 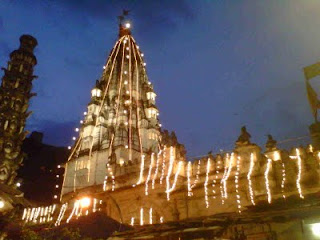 After many, many years, I spontaneously decided that I needed to visit the Babulnath mandir for a quick darshan. I needed a moment with God and a moment with myself! I work right around the corner and never make it there, so I woke up last morning with a feeling of great determination. Luckily, my mum and me are accomplices in the month of Shraavan and I got her to come with me. Yesterday was Shraavan Somvaar and also, Monday is Shiva's day so the mandir is always quite packed. How ever, in terms of organisation and obedience, it was all quite civilised with several volunteers holding ropes, controlling traffic direction and movement, helping people move into the right queue etc. The both of us jumped out of the car with just a wad of money and our phones in our hands and were moving towards the step rather aimlessly, unlike the streams of Babulnath pros around us - who were all rather appropriately dressed and new the drill very well. Luckily, we heard the word "senior citizens" and used my mum's (unbelievable) senior citizen card to our advantage, gliding past the normal queue and directly towards the elevator route! A funny thing happened to us when we went to deposit our chappals at the footwear booth...Whilst taking the token from the volunteer behind the booth, my mum automatically said thank you and was about to move when she got a sharp retort from the guy saying, "No thank you, sirf Hari Om bolo". Now, as I type this, I realise that his sharp tone is lost, but honestly he was very rude. In order to avoid what could have been an altercation, I gently pulled my mum away who was ready to give the guy a basic manners lesson right there!
All was forgotten once we were up at the mandir. It was twilight and the mood was magical. There was a cool breeze going, the temple bells were ringing and the crowds were mellow...After a great darshan, we made our way down the stairs only to be engulfed in the powerful and heady Aarti of the famous Babulnath babas. Honestly, I don't know what was mixed in the dhoop, but I was instantly drawn into the smoke and with my eyes shut tight, I got lost to the rhythmic beats of their dhumroos. It was intense and moving.
Following the crowds murmuring  "Hari Om, Hari Om", we got back down and made a hurried dash to our  favourite family joint, Soam and broke our fast on a substantial amount of faraal food........Really counter productive if you think about it. But the meal was de-lishhh as usual....Can't wait for the following Monday for yet another fast-breaker!
Posted by Arundhati at 18:20