A strange thing happened to a bunch of us on Friday night....

We had all met up at a friend's home and since many of us were working the following day (grrr), it was an easy night in filled with lots of gupshup and even more yogurt bay!
The mood was very relaxed with Andy Murray in the background, some were following the match, another was trying to set a new record playing Angry Birds on the iPad, whilst another was driving the dog (and all of us) berserk with a never-ending game of "fetch".
Briefly put, it was a sombre and fairly sober affair. No gaana-shaana, or dance-wance!

Calling it a night at about 1am, the crew was awaiting the elevator. When the doors opened, out strolled 2 police officers who were ready to march right into the apartment. A few moments of sheer confusion later, we were informed that "some one" had called complaining about the noise coming from the apartment and they were checking on that.

We were more girls than guys and it was more than apparent that there wasn't even a small party going on as the apartment was shrouded in darkness and we were at the elevator making our exit. Luckily, this strange incident didn't last over 10 minutes with the sheepish officers beating a hasty retreat when they saw the lack of a "valid opportunity". But it highlighted some gaps in our security systems. There are basic freedoms of residence and it is prohibited to enter an apartment without the necessary warrant or documentation. We all were left with a murky feeling that it was nothing more than a room to make a quick buck on a Friday night. The sleepy, tambakoo chewing, over0weight security guards that are responsible at the gate and lobbies of private residential buildings, are completely inept at their jobs. They come from various parts of India to the city of dreams and quickly get hired by these security agencies. Completely fresh from the village and without the necessary training, they often serve as hazards then as help. That being said, we as citizens ought to take more of an interest in sorting this situation out and setting standards with our housing societies regarding the employment of these guards.

Other than that bizarre twist to the evening, it was super not just meeting up with the crew, but the best part was meeting the adorable Polo....A Spaniel-Poo (Cocker Spaniel mixed with a Poodle), who had a fresh haircut and was groomed to break hearts!!! 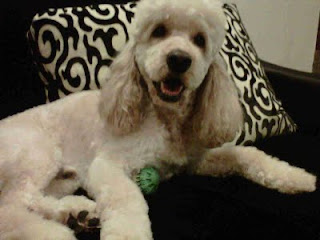