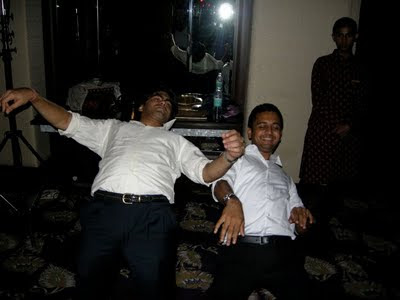 I spent Saturday evening at an impromptu performance of sorts. Luckily, this show didn't require my waiting in line or buying tickets. On the contrary, I had a flute of champagne in my hand and the best seats in the house! Perfect!

In the past two years, I have noticed the new Inhibitions-Free Indian man take to the dance floor with not just great gusto and enthusiasm; but with a streak of confidence. He grooves, he moves and he tears it down. At all the various sangeets and wedding parties I have attended in recent times, it has been the male factor who have contributed to the grand performances and who have burnt up the dance floors. It has not been the women, who have been more preoccupied with their hair, their cumbersome outfits or trying to sneak away for a quick ciggy some where. Mean while, the men, a good number of drinks down, are sweating it out and dancing with one another to the latest Bollywood track. As the night progresses, and the shots are consumed, the level of competition between them goes up. I have enjoyed watching Dance-a-thons and dance duals amongst the guys. Age and/or size no barrier, these boys mean business when they are at it. What is commendable is that they have are very competent dancers and far from awkward! Do we owe a big thank you to Hrithik and friends?

Case in Point:
Last winter, my dearest friend got married in great style. The dance practice sessions had begun a month in advance and every one was involved, whether they liked it or not! I was part of the bride's entourage and our lot was expected to deliver the best, most, racy and most dhinchaak performance at the sangeet. On popular request and on the behest of the bride's entire family, the 6 of us were doing the finale on "Munni Badnaam Hui".. The idea was to tantalize and shake up the otherwise traditional Madu and Gujju uncles and aunties to ultimately join us on the dance floor and make it a night all would never forget. Admittedly, we were no munis and we all feared the badnaami we would face for not delivering a paisa-vasool show...To say we lacked the very spirit of the song would be to say the least. Self-consciously, we girls would shake our shoulders and just about  do an acceptable thumka. Definitely not the hot and happening girls the audience was expecting. So at the evening before the sangeet, when we were going through a final run-through, we were surprised to see the brides brother (the official Master of Ceremonies for the wedding!) and his band of boys show up at our time slot. Something was definitely up...the boys had been incredibly secretive and covert all this while, all their practices were post 10pm and no one had an inkling of what they were up to so their unusual presence at the time indicated some thing fishy. Meanwhile, the dis-approving dance teacher gave us no choice and told us to carry on with our sequence and we nervously complied. At the end of our 90 second jig, the boys started laughing and a round of high-fives went about. Flushed and embarrassed, we quickly rushed out...the damage had been done.

As we stood on the sides of the stage, hot under the lights despite a crispy cool evening in Udaipur, we girls exchanged one final look. Well it was now or never...here goes nothing..! So we shimmyed and shook as much as we could and did our bit. And yes there was some clapping and maybe one person hooting, but nothing special from the audience. As we were making our "exit"; we saw the boys preparing for their "entry". That was trange, we had just completed what we thought had been the finale for the night. "Munni badnaam" started all over again. Woh, is that our cue? Had we some how gotten an encore from the audience?! We looked to the stage and saw the boys in perfect synchronisation - waists jiggling left-to-right and hands pointing with precise accuracy. Not to mention, perfect facial expressions - just the right amount of adaa and arrogance! The audience was going wild and every one was now on their feet! The male Munni scored way higher in terms of everything. We had not just been upstaged, but we had been completely outperformed and outshone. They had done an amazing job of the hottest item number much better than we had.Most importantly, they had delivered.


Which takes me back to my Saturday evening. This time, I didn't even try to compete or pretend that I could do it like they could. I did the smart thing, I got a super spot and  watched as the birthday boy and his buddies took to the table tops and bar tops, belting it out whole-and-soul to Dabanng and more. all the while thinking, "chaar baj gaye lekin party abhi baaki hai" 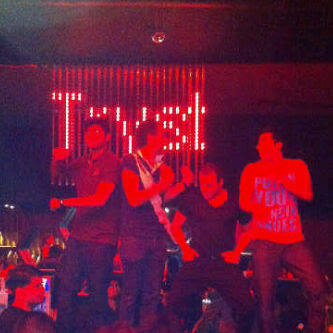