A chapter from the Travel Hazard series

The clinical term used for the fear of flying is known as aerophobia, aviatophobia, aviophobia o rpteromechanophobia.According to the experts, the fear of flying may be a distinct phobia in itself, or it may be an indirect combination of one or more other phobias related to flying, such as claustrophobia (a fear of enclosed spaces) or acrophobia (a fear of heights)Commercial air travel continues to cause a significant proportion of the public and some members of the aircrew to feel anxiety. When this anxiety reaches a level that significantly interferes with a person's ability to travel by air, it becomes a fear of flying.A fear of flying may prevent a person from going on vacations or visiting family and friends, and it can cripple the career of a businessperson by preventing them from traveling on work-related business.

I know people who suffer from all of the above. They genuinely cant look out of the window from the balcony of even a 5th floor apartment, nor do they feel normal in a confined elevator and in most cases they get dizzy when at an altitude or in motion.
But have you heard of travelophobia? It isva newly-discovered fear of airports, trains, buses. Well for those who haven't heard about it yet, it is a grave disorder and I happen to suffer from it.


In the past 4 years, I can perhaps recall just one single incident where nothing "bad" happened to me whilst travelling by air. For some one who is a travel junkie; it is ironic how almost every single travel has been struck by some bizarre misfortune! I must say, I have developed travelophobia only since 2007, when I set sail for what I imagined would be one of the most magical adventures of my life - Paris.
Now, I am not quite sure whether it is fair to blame my travel follies on to my heightened levels of enthusiasm or not. Enthusiasm is a good quality right? Well, not when it gets you so giddy-headed and excitable that you over look very basic travel norms and end up in the tiny office of the Police Officer at Passport Control, every now and then...Yes, been there done that.  A couple of times actually.
As a student living in Paris for the past 3 years, I wanted to exploit my time in Europe and use every spare weekend (not to mention, spare euro), to travel within the continent. I would plan every single trip with utmost care, trying to snag the best available deal. Every thing would be meticulously planned  - with print outs of the documents, list of things to do, local guide book, appropriate packing, the whole works. Additionally, all these papers would be "systematically" arranged in various kits; so as as to be easily accessed at the time of check in.


Perhaps the first four or five times that I had messed up; I blamed it on my lack of experience, language barriers, transportation strikes and so on...but after the initial goof-ups, it dawned on me one day, that this situation was definitely not normal and there was most definitely a pattern to it. Ever since then, I have become a patient of travelophobia.


The following tale has 3 principal character: the (in)Efficient One, the Sane One and Moi.
Exactly a month ago, I was living the good life - I was in St. Tropez with two of my oldest and closest friends for a sunny girls weekend. Logistics were a bit complicated but were taken care off. I was meeting the both of them at 9am at Nice airport and we were then hiring a car (that had been pre-booked by the (in)Efficient One from the 3 musketeers) and then embarking on a journey to St. Tropez.
Bleary-eyed, and trying to keep the massive, suitcase in place, my bus journey from Cannes to Nice, was spent praying for a smooth and trouble-free weekend. Our reunion at the airport was hearty and warm and we did a group hug asking God to be kind to us. We made our way to the car rental agency and much to our surprise, the (in)Efficient One had felt it necessary to book us a big four-wheeler! I was the alleged driver and I had never driven outside of Mumbai so this was definitely a risky idea. However, the (in)Efficient One, insisted that she has been driving abroad for the past 4 years in the US and is perfectly comfortable with the left-hand drive, ought to begin the journey. OK, we complied - let's get this party started. The following twenty minutes was spent jerking back and forth in the parking spot, unable to get the car to start and then driving in circles, unable to find the exit! A telling sign for the things to come.......?


Fast-forward: Sunday evening, a lot of drama has transpired in the past 48 hours. Even if I could, it would be wise never to share those tales over the internet. We are really bushed and are in the midst of a adrenaline-charged, race against time to Nice airport to catch our flight.
At this point,it is important to note technical and mundane details as they are critical to the story. The original plan had been that the 3 of us were booked on the same flight to go to London together with a departure time of 9.30pm. We have left our apartment in St. Tropez at a perfectly reasonable 1pm and have decided to stop off at Cannes for lunch.


Rewind:Much to our horror, we woke up on Sunday morning and whilst the kits described in paragraph one were being put together, we realised that the (in)Efficient One had booked the 2 of them on a flight for the wrong date.  Like I said, it was a Sunday and it was the last day of the Cannes Film Festival, all the airports and airline companies in the region were over-booked. We were in a vulnerable position since we didnt have the option to stay on another day (Schengen visa expiring that very day and a connecting flight to Mumbai that could not be missed!), nor did the airline we were booked on have any available seats.Currently, I was the only one who didnt have any of the above travel obligations and I was the only one with a ticket. Wow! It felt strange and all the usual symptoms of aeroport-phobia began to kick in - palpitations, quivering hands, headaches, nausea... 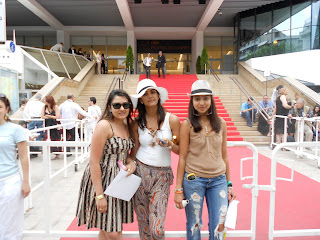 I am trying to hold it all together whilst driving our massive car on the highway. Mean while, the Sane One desperately calls her husband in Mumbai to help salvage the situation. 2 hours later, all is well again. Fresh tickets have been bought for them for a 8.30pm flight to London. The new plan is: We enjoy lunch, have a red carpet moment at the Grande Theatre Lumiere in Cannes, grab a gelato and head to the airport. It is 2 pm.
And what was the situation at 6.30pm? 3 hysterical girls in a car stuck on the highway, one is driving, one is trying to tele check-in, and the third is attempting god-knows-what on the blackberry. Chaos! After every thing, it seems that they are close to missing this second flight too.....the next 30 minutes is pure confusion and we don't make a pretty sight. In utter frustration, we are fighting with another, things are bring thrown about, tears are being shed and the cars on our side stare at us in disdain. As we pull into the terminal, the Sane One literally flies out of the car and does a mad-dash toward the check-in counter, meanwhile me and the (in)Efficient One, stop the car to get the luggage out. The only catch is you are allowed to stop the car for a mere 5 minutes, following which you get a ticket. It was then that the deed was done. In my mind, I thought it wise to give the girls my suitcase to check in since they were flying a regular airline and me, a cheapie one with severe luggage restrictions. How ever, at that moment of time, it was impossible for the (in)Efficient One to lug my hulk plus their suitcases all the way in to the airport. Obviously, there was not a trolley in site and the seconds were ticking. It was 7.20pm and normally, the check-in counters shut an hour prior to departure. So what happened instead? Without  a second thought, I gave her my second piece of luggage (Yes, I had more luggage!), to take with her and zipped away leaving her with a heap of bags.
After returning the car to the agency, I took a deep breath and reflected on the past 2 hours and breathed a sigh of relief. I had some time to kill before my departure, it felt good to arrive early for a flight. I should do it more often, I thought. I stand in the short line rather smugly, passport and printouts in hand...very nice indeed. The lady at the check-in looks at me and opens her mouth to say something. I know what it is going to be - the excess baggage, so I start digging in to my bag for the dough. She stops me and says she cant find my UK visa. Alarm bells start ringing. PANIC! Oh dear god, this is no happening. Not now. Not after every thing we have had to endure already. This is too much for one person to bear.......................


What kind of person does that? Who doesn't keep their passports together?


I called my friends up who had just about been allowed to board their flight. By the time this tragedy had struck, we were all so numb and severely exhausted. They valiantly fought till the bitter end, trying to get my luggage off loaded, but a few seconds later, the plane started to taxi and all connections were lost.


So what happened to me and my big suitcase then? Well, I spent lots of time with the officers at the passport control office, then with  some random lady who spoke only Spanish but offered to hold my hand as I cried silently and finally with an endearing bus driver who took me back to Cannes. A kind friend who I contacted whilst this transpired, took charge and offered me his home for the night. His loving aunt came to get me from the bus station and settled me in. One warm shower, 2 restils, 9 hours and 2 strong coffees later, I was booked on the next train back to Paris. Getting my passport with the valid visa just seemed like a complicated nightmare and I decided to cut my losses short, enjoy a few more croissants and save my Pimm's cravings for a while longer...!


Other chapters from this series include: Zip the Bag,
Don't drink and take your camera with you,
Check the Line you are waiting in
Remember to leave the ATM WITH your Card
Check the Terminal


I don't know if the above story highlighted how grave a case of travelophobia I have. But let me say, that it isn't easy to cure. I am sure there are more people who suffer from it too. We should definitely swap stories!