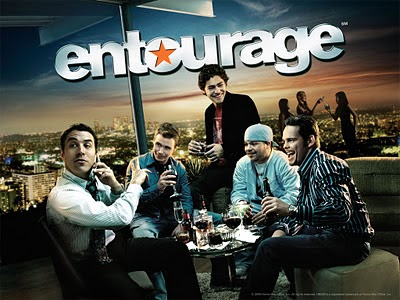 I am quite sad as I typed my farewell to Vinny Chase and the boys. It has been an exciting 8 years with them.

I must admit, I have always been starry-eyed and have secretly longed for a taste of the life of the Hollywood Brat Pack and watching the 22 mins of Entourage was the closest I got to it.

I remember when the show started, I was instantly taken into the world, living vicariously through them - chilling in the pad, shopping with them, going to the parties with them, rolling through town in one of their awesome cars (I had a soft spot for the yellow Hummer though) and basically living it up with them!
I remember the first time I visited L.A was in the second season of the show and by then, I had my hit-list of entourage hot-spots to go to. Luckily, my friends there were super savvy and bigger fans than I was, so I got pretty darn lucky and spent those days blissfully at the Urth Cafe (Vinny's all time favourite cafe!!), hoping for a sighting of any one of them!

That didn't happen but the love affair continued...

It is difficult for me to pick my favourite character; although I love me an Ari Gold. Whattaguy!
Despite his garbage-filled mouth, his utter disdain for society at large and his serious anger management issues; Ari Gold is a gutsy workaholic, a family man and a live-wire of a person, who ends up showing rays of humanity when it really counts. His dialogues are epic and worthy of a compilation!
Of course, you gotta love Vinny Chase - the man with the entourage. The best thing about Adrian Grenier is his eyes. The boy hardly has to do more than look at you ( or rather, the camera); to get your heart to burst with love . I must say, as the show went on, the Vinny Effect did start to wear off. His character was written weakly and became less and less charismatic. Also, after a point he got fairly side lined and irrelevant. But not matter what, Vinny remained a "chick magnet", gathering into his coterie most of LaLa's finest....But always, making sure to share the wealth with the rest, along his conquests.
And who made sure to be around Vinny at all times, especially when the girls were around: Johnny Drama and Turtle, of course. The most endearing of the lot, these two play the Laurel and Hardy duo in the show. Drama, Vinny's older sibling, makes one ponder of the wonderments of genetics. How can a Vinny have a Drama as a blood brother is quite a thought. Johnny Drama is one of its kind - brimming with inner confidence and self belief as an Academy award winning actor who for some strange reason hasn't received the kind of acknowledgement he ought to have by the industry in general. A fierce protector of the brood, Drama is the official nourishment provider to the entourage, whipping together the most delicious looking breakfast spreads. Whilst Drama tries to spread his positive cheer, Turtle tries his best to "score". Literally speaking! In his signature cap and sneakers uniform(with Arnold his massive Rotweiller in tow), Turtle ends up as quite a "chick magnet" himself getting Jamie Lynn Sigler as one of his serious girlfriends. I think it was that relationship that serveed as a turning point in Turtle's personality since he had started out as Vinny's Man Friday, the official driver and provider of the herbal stuff  in the crew. He swiftly graduates to become an astute businessman and independent individual, trying to break away from Vinny's shadow.
hat leaves me to Eric Murphy. E, oh E! Principally, he serves as the Voice of Reason to thr group, often popping them out of their self delusions and self indulgences. E is the most stable and conventional of all the characters. Eric is the good guy, the hard working guy, Vinny's best friend and manager. He and Ari remain at loggerheads with another through most of the show, but end up joining forces in the end. Eric gets his dream girl (of course!!!) and alls well that ends well....

With a smattering of several other incredibly memorable characters (Llyod and Shauna particularly). Not to mention, the self-starring appearances, every episode was smart and with it. You really did feel like you were with them.

All in all, a disappointing and anti-dramatic final season to my favourite show, I will miss all of them dearly.Oh well, I guess I can always turn to Californication and Weeds, any time I need to connect with the West Coast sunshine. That's before either of them (Moody or Botwin) don't entirely crumble in their own mess.

Oh, Oh, Oh --- but this weekend, I know I can definitely turn to Paris Hilton to bring the LA Times to a TV screen near me, Welcome to the Bay Ms. Hilton.....That's Hottttt! ;)
Posted by Arundhati at 00:39