Paris oh Paris - The City of Light, as its widely known , is a city that has always presented a paradox to me. Love to Hate it and Hate to Love it. C'est difficile non?

Life is always a bit difficile for the average, stressed Parisien. I have come to understand that this feeling is now an inherent mood of its citizens, being the effect of socialism. The French, are famous for their grumbling, regularly ranking near the bottom of global happiness indexes. Malaise, after all, is French for ill at ease. As an MBA student, studying in Paris between 2007 and 2010, an infectiously happy and cheerful character (moi), was soon affected by this heavy feeling and general gloominess. Sad to admit, my time spent there was not particularly happy but this wonderous, beauteous city gave me a lot of other good qualities and it opened my eye to another part of me that had remained largely hidden up till then. Hence the paradox! The glorious city which has the most amazing buildings, avenues, spaces, food, wine and more; in the world, has people that don't feel the right enough to enjoy it. Even during summer, you will see the city filled with people on the streets (all Parisiens walk….) but the ones that are happy, smiling and taking selfies are usually the tourists that come to the city be it sunny, windy, rainy, cold...the majestic Eiffel Tower always stands proud and photogenic for them.

This summer, on behest of an old and special college friend, I decided to kick-start my summer vacations landing in Paris. I landed at the dreaded CDG Airport (a place that has left me scarred with worrisome memories and some tears) only to be welcomed by the glorious sunshine and got my bags quick enough and set off into the city with a smile on my face and a rumble in my tummy. Croissants were calling out to me….as were the pains aux raisins. Cheat day started the moment I landed. Oo la la! 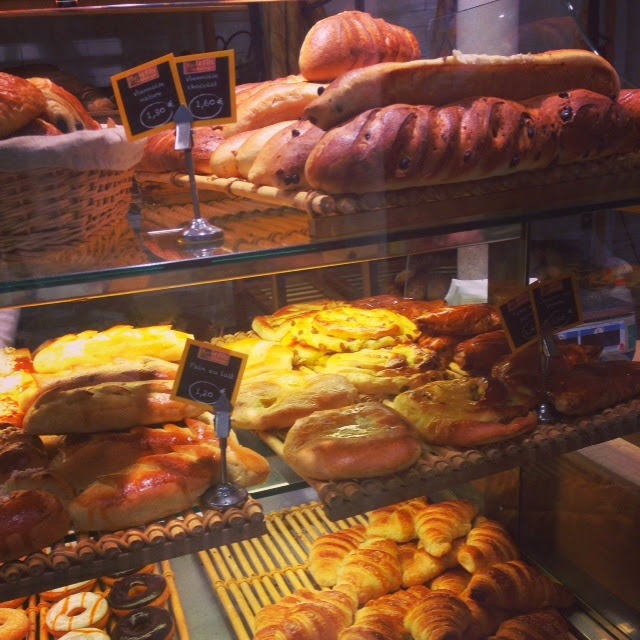 On reaching the apartment, that I shall henceforth remember as Hotel Majik, I was temporarily lost in the sense of deja-vu. The place looked and smelled exactly like it has been in 2010. That's another thing about Paris - it takes the adage "old is gold" rather seriously, as did my friend too I guess! Everything stays the same as it always were and little care is taken to modernize it. Even when things have been modernized, they are done rather subtly. So subtly that one often misses them! 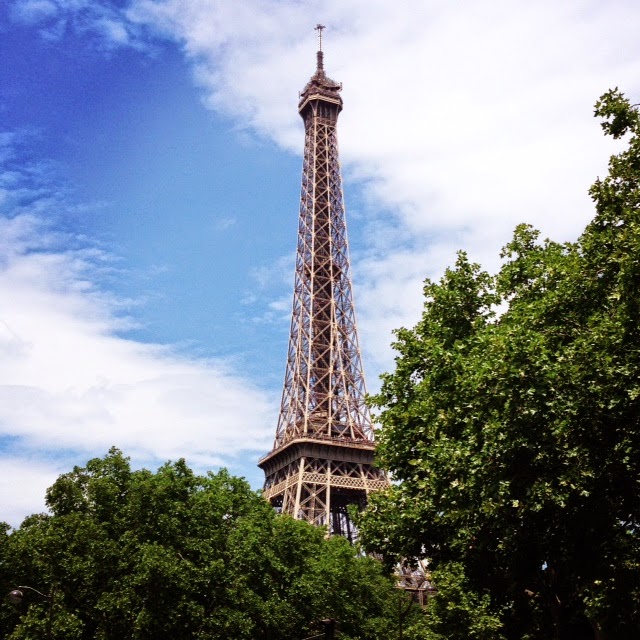 To profit the sunshine, I jumped out of my airplane attire and into something loose, chic comfortable to hit town. Hotel Majik owes its name to its owner and the magic of the location - right under the Eiffel Tower! So it didn't take me very long to get into the mood as I waited for my favorite bus (no. 69 :S) and watched the trigger-happy pose under the iconic monument on that sunny morning.

The day passed by in happy oblivion as I walked in my favorite neighborhoods, ducking into my old, favorite streets and often pausing in front of the creative vitrines of boutiques and high-end brands that have the most startling and amazing windows at their Parisien outlets. As mentioned before, Paris is a city made to walk through, and I am certain it also the secret to all french women's fantastic physique; so I intended to do my bit too! But honestly, discovering the city by foot is the best way to find little alcoves and details - a beautiful courtyard, a set of inspiring doors, intricately designed wrought-iron balconies or simply, a charming bar and fabulous oyster restaurant. 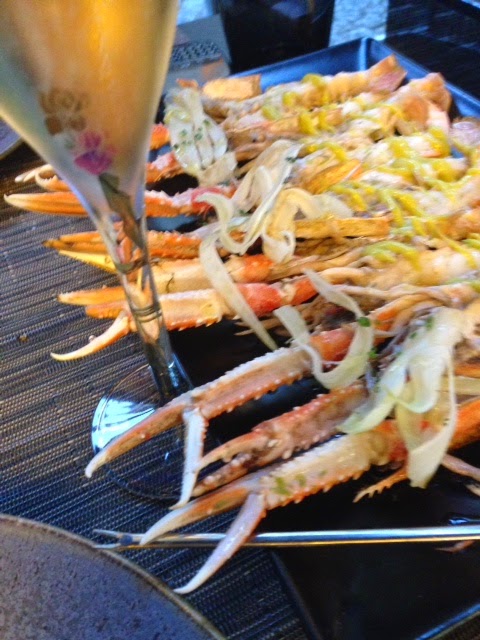 That evening, I went to a marvelous restaurant for dinner, "Les Fables de la Fontaine" - a seafood speciality restaurant, perfect for a romantic, seafood evening (http://www.lesfablesdelafontaine.net/1.aspx).
Fuelled by the yummy champagne and seaweed butter, the first course of delectable langoustine was a bit of a waste on my insensitive palette. The second course of river Sole made up for it and how….a perfect end to my first evening in Paris and beginning of a memorable vacation.

The next day, I met another old friend for lunch. A tough and determined girl from Taiwan who had now setup shop in Paris. Marrying a Frenchman and working with the most well-reputed French luxury brand in the world, I imagined she would be gushing about her perfect PArisien life. Instead I was surprised to discover that her sentiments were quite similar to mine on the state of affairs there and the acute dip in the quality of life in an antiquated and expensive city apartment. She was thinking of moving, and couldn't wait to do it soon, except for the bump on her belly that was deterring her plans by some time.

The afternoon turned out to be rather delightful as I went to check out the banks of the river Seine and chill out at "Les Berges". A recommendation from a true-blue, born and bred Parisien friend who told me that in my short time there, I ought to check it out (http://www.outandaboutinparis.com/2013/06/paris-does-it-again-newly-opened-berges.html). Designed like the Highline in Manhattan, it is a very nicely refurbished pedestrian plaza right upon th river and a novel way to enjoy the city and fine weather.

Unfortunately, I had to cut it short and rush off for the French countryside to witness the aftermath of a French-Lebanese union and partook in the merry making. Returning with the gang the next day (a Saturday), the french heaviness suddenly set in. First it was the commute back with the ridiculous traffic (some strike or the other got things to move slowly. The French LOVE revolts and strikes), then was the miserable weather (rainy and very cold) and the lack of enthusiasm for even young people to enjoy on a Saturday. So I gave in and went with the current vibe and decided to wake up early and meet my old flat mate and her husband (both darling friends of mine) for brunch, before catching the Eurostar to Londres. As it turned out, the next day was also cold and quite grey. Let me be sure to tell you that Parisien's idea of brunch food is far from what we think of brunch in this part of the world. I was lucky that the eggs were freshly prepared and having them scrambled was an option! The rest was vienoiserie of no special nature - croissants, muffins, some crusty looking salad and a decent coffee selection. Oh well, I was off to the land of crumpets and scones soon enough and my company made up for the blah meal.

Sitting back on the train that I nearly missed (another very normal occurrence in my travelogues), I thought about the last 3 days that I had and held on to all the nice things that I had experienced. It had been short, sweet and adequate….as always, I left another small part of me dans les rues. One day, I will come back to pick up all the little parts that I have lovingly scattered all over this special place.

We will always have Paris.