Stay CALM and Carry On

Late in 2012, we saw a merchandising exodus of banners, posters, greeting cards, pop art - you name it  - bearing the slogan, "Keep Calm and Carry On" . Ever since, we have all seen numerous variations, adaptations, manipulations and personalization to the popular saying.

I had a funny last few days and this line kept ringing in my head.

Upon my insistence a few months ago, my mother agreed to attend the CALM Literary and Arts Festival as a speaker and visitor, hosted in the Eastern Indian city of Shillong. When the e-invitation came to her, she floated it amongst the group (La Familia), consistenting of my mother plus 4 of the Mumbai-based siblings. My travel-greed urges surged and I promptly agreed to go as her plus one. Never mind if I have a job, from which I had already gotten leave a few days later, or that I was suffering from an acute lower back pain. "I love adventures, and a trip to the hills is just what the doctor ordered," I told myself.

Cut to two weeks before the travel date, when my life was topsy-turvy with work and other banal issues that needed my serious attention. Amidst the activity of the previous month, I had put this Shillong trip away from my mind. Work travels and responsibilities were a bit sensitive and I wasn't entirely on top of my game. Mum reminded me that we were now obliged to go ahead with this trip because she never ditches or breaks her commitments. Oops, I had just trapped myself! So determinedly I went ahead with it, despite the butterflies fluttering away in my stomach. With not a clue as to the precise geographical location of Shillong, nor the details of the journey between Mumbai and Shillong, I found myself at the checkin line that fateful morning. It was only at this point that I noticed the departure and arrival time and let out an actual shriek! I was in for 6 hour flight, followed up by a 4 hour flight.....ummmm definitely NOT what the doctor has ordered. My mother, now even more furious at my ignorance on the whole trip, tried to keep her cool and told me I ought to cancel and go back to whatever else that needed my tending.

Wow, this journey had gotten off to a brilliant start......!

That was just the prequel to indicate the circumstances and sequence of (mis) events that had led me to a disastrous mood. The post eventually does get better!

Pulling into the erstwhile Pinewood Hotel in Shilong, I thought this trip couldn't get any more unfortunate. Actually unfortunate for my mother who had to endure such an unpleasant travel companion! The hotel was meant to serve as a giant white flag that would make up for the tedious trip there. But alas, it was a little lodge that had been built by our Colonial rulers somewhere in the 1600's and I believe had been minimally refurbished since then. The room was large with creaking wooden floors, dim lights, funny synthetic bed covers and a prehistoric telephone. One hot baalti bath later, my mood had perhaps marginally improved - enough to flip through the room service menu and order us the first hot meal of a looooooooong day. My dietary requirements and precise instructions seemed to have been understood by the cheerful chap at the other end of the crackling line. It felt as though I was making a "trunk" call to a land distant and disconnected from the present times. Mum was happily organising herself and getting comfortable in her present surroundings. I watched her going about her ways enthusiastically and felt so bad that I lacked that sense of contentment, gratitude and adaptability that she was displaying. She had remarked that had my father been with her, he would have managed perfectly well too. And there I was all prickly and prissy, unwanting to cheer up and join her at the the festival dinner, choosing to eat in. 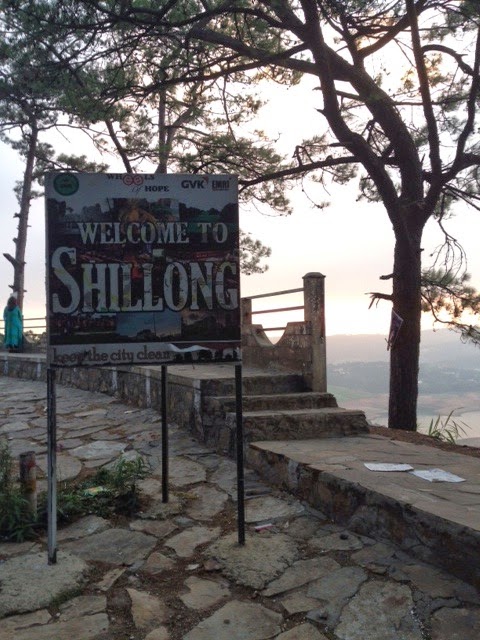 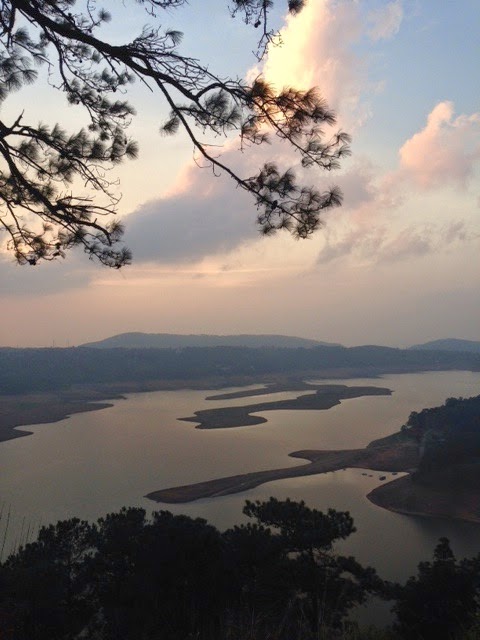 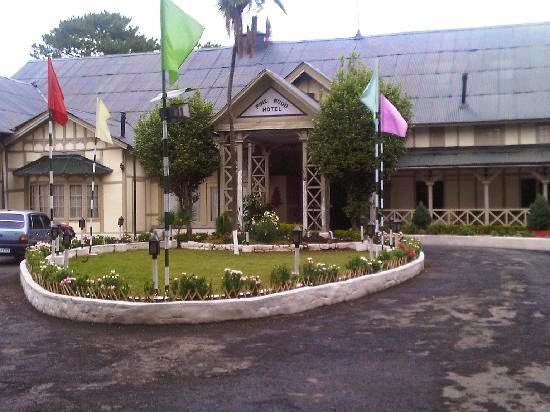 First silver lining- the meal was surprisingly delish - English style roast chicken served with tasty carrots, that made for a satisfying meal as I watched my mother get dressed up and leave for dinner. She tried asking me to come along one last time, but I was immobile like a rock. I had managed to setup my laptop next to the bed and sought solace in digital bliss instead. Besides, I was worn out from the long trip and no sleep so I assumed to crash out pretty early.

4 hours later, I found myself furiously dialling my mother and summoning her back. The electricity had gone and I was spooked! She rushed home shortly after, quickly got ready for bed in the pitch dark and let me clutch onto her tightly. At some point we both drifted off and I remember thinking, "Hmmmm, maybe I can hack this plan after all..."

The next day was our only productive day and I wanted to do as much as possible. We set off towards the Shillong Peak which provided the most brilliant views of the city in the valley. The drive to it was indeed lovely. Mother Nature has blessed the region with flora and fauna, such a treat for eyes used to seeing steel and grey most of the time. The vibrancy of the trees abundant with their summer blossoms was quite uplifting - burning red gulmohars, velvety purple jacarandas and gleaming yellow laburnums were just about everywhere. Not to mention fields and fields of a delicate white flower that we soon discovered were potato flowers! The state of Meghalaya is the capital of the choicest potatoes in the country; and even has a large building housing the Potato Research Center. In addition, the region also has wonderful vegetables and fruits like the carrots I had for dinner - leafy turnips, massive cauliflowers, all kinds of berries, tasty pineapples.....mmmm, food items we often associated with "imported" variety that we may chance upon at frightful prices at a Natures Basket or get to eat only when traveling abroad. At the peak we stopped by at a strip of these vendors and gleefully bought as many vegetables as our hands could hold, at a pittance! It hurt us both to observe the painfully severe and backward lifestyle of the vendor-women, all belonging to the tribal community that has always existed in that region. Don't they ever want their life to improve or were they happy with the simplicity of it all? The ladies looked at the both of us with a bit of disbelief. We were after all going crazy over sabzis! They still cracked a Betel-but stained smile at us and helped us load their wares into our bright red vehicle which the driver had re-designed to resemble a faux-Ferrari.

Another amazing find was the hydrangea flower that we in the city are ready to pay an arm and a leg for. They make the ultimate statement in luxury floral gifting......in Shillong, they were growing wildly all over! Even the most depraved home or locality had unbelievable flowers growing about the thorny boundary wall. English roses in a scarlet red, yellow Lilliums, delicate orchids and heaven knows what other variety of exotic flowers were growing here in such an unfussy way. 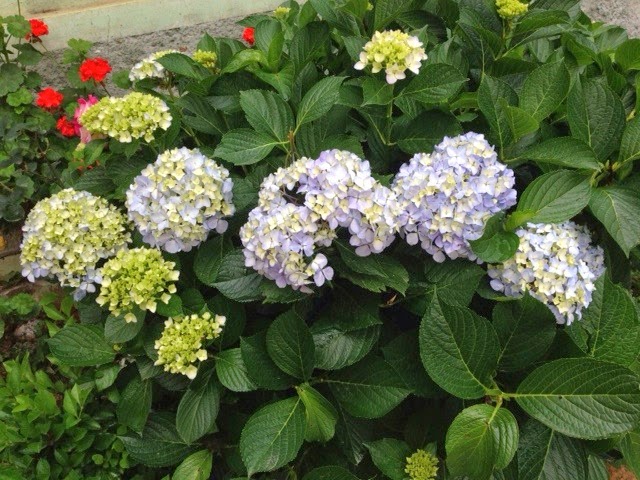 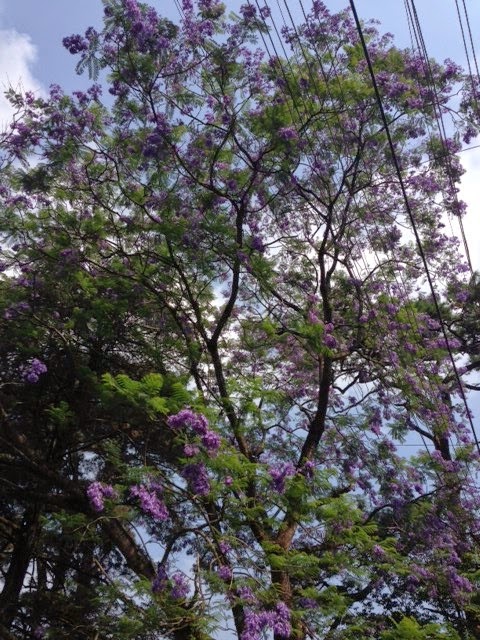 Our next stop, the elephant waterfalls was also quite enjoyable. Small falls, neatly preserved, swarming with Bengali (maybe even Bangladeshi) families, enjoying their summer vacation. Simple pleasures, I kept thinking all the while watching them chattering amongst themselves in their plastic sunglasses and posing for selfies, of course! We then had to trek back to the city as mum's sessions were scheduled that afternoon. The venue was the Central Library and the atmosphere was that of a college cultural festival. The local teens with their mucho trendy hair styles were encouraging one another as they each got onto the little stage and gave a go at winning the talent competition. Their raw talent was quite incredible to watch. I didn't know that the region produced some of the best singers in the nation, and was happy to learn that the Shillong Choir was one of the leading choirs in the world! 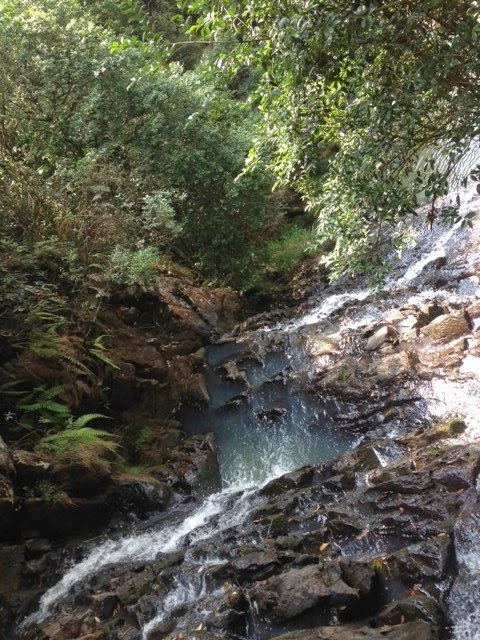 Having much else to do on my own, I grabbed a plastic chair and sat in a discrete corner as my mum met up with fellow colleagues of the literary world. The sessions then began and I sat through a few.. No doubt the conversation was animated, opinionated and well articulated by all those up on the dias. I felt rather ignorant in their midst with a skimming knowledge of any of the subjects. My mind continued to remain preoccupied with what was happening at the office at that very same moment, where all my friends were and how to get the 3G services on my phone to get going! 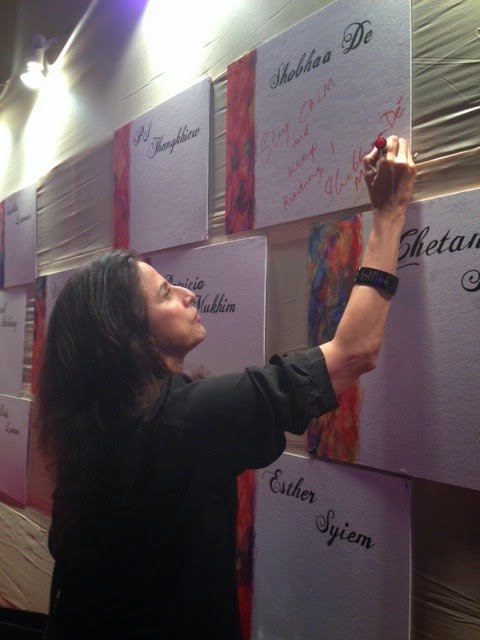 Finally lifting the heavy fog that weighted over my moods, was a stand up comic act by an artiste who goes by the name Papa CJ. He was pretty fun and managed to get the packed auditiorium in splits! My mum looked at me and perhaps breathed a sigh of relief as she saw me chortling with laughter. The evening continued with a dinner at the Govenors House, the Raj Bhavan. A beautifully well maintained colonial home in the hills, with lovely lawns and stately bearers took me to a period unknown. In keeping with the local food fare, dinner was a bit strange with a motley selection of un-tasty dishes. Pork is the food of choice and all of the city is lined with open Butcher shops, cutting up all sorts of animals. Quite disgusting! At precisely 9.30pm the dinner ended so s few of the youthful crowd, went to a bar called Cloud 9. I hung around a bit, preferring their company to being along in the antique hotel room.

The next morning, we had to set off early. Remember folks, it's a 12 hour journey back home. I managed to visit Wards Lake for a spot of exercise before the arduous journey. I wanted to experience the beautiful floralia one last time before returning to our concrete existence. The cute little garden had magnificent lotus ponds completely covering the water surface. I felt a bit uplifted.

I soldiered through the drive back with a much better spirit than the first time around. A yummy lunch of fragrant "chowmein" was collected from a street side dhaba (my first dhaba experience) and taken as a doggy bag that was relished by mother and me on a packed Indigo flight from Guwhati to Mumbai.

All the while, I kept wondering what purpose this particular travel had served in my life's learnings....not quite sure if I have figured it out. For sure, patience is on top of that list, which takes me back to....."Keep Calm and Carry On"

Have a wonderful week. 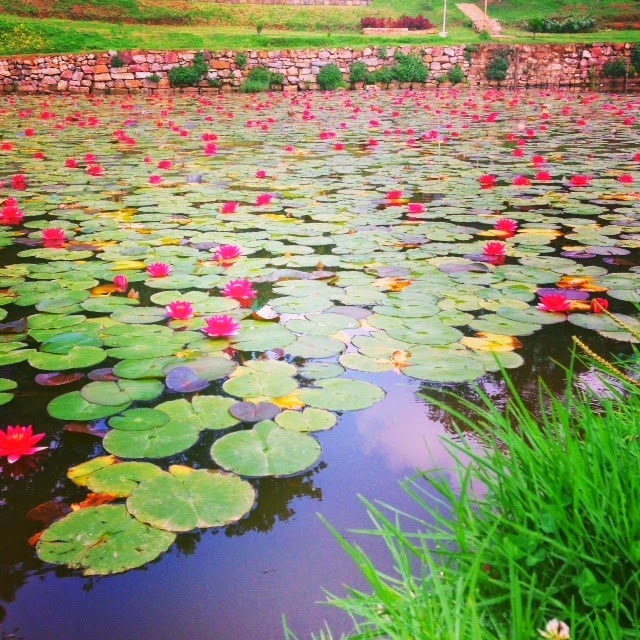