Hairspray (not the musical....)


Movies screened in theaters in India are (rudely) interrupted by an (abrupt) "intermission" so that moviegoers get the chance to top up on their popcorn-coke-pizza or take that ever-pressing telephone call that buzzed through the first half, much to the annoyance of the other patrons....either way, the intermission serves as "necessary" pause during the movie.

Unlike our Bollywood movies, Hollywood movies aren't made for this halfway break. So it is rather annoying whilst watching the movie, where the film is moving towards the climax or a character is saying something fairly important, that the film grinds to an abrupt break. In any case, I digress....

During the intermission of American Hustle, I looked at my friends with whom I was watching the movie to chat and check how they were enjoying the movie. But incidentally, they were in need of that necessary pause to replenish their pop-corn tubs and I was left alone to ponder on what I felt about the movie. Curiously enough, I realized that I had been watching the movie more for the crazy-crazy-hairdo than the other aspects!

It was curiously strange, but each character in the movie, had his/her own hair-story going. So much so, that the hair was its own separate entity, having life and motion of its own. I was just riveted by the fashion of the time on display, dominated by the brilliant coifs on display.

In the second half, when all the characters come together and the mob is brought face-to-face to the fabricated Sheek (wonder why they couldn't pronounce it shake for a "sheikh"). At this point, all the central characters  are dressed to impress and share the same scene and the screen space. It is a treat to see the glamorous, O.T.T and vulgar style of the 70's come alive on screen.

Seductress, Sydney Prosser (Amy Adams) plays the icy mistress of protagonist Irving Rosenfeld as well as the apple of FBI agent Richie DiMaso's (Bradley Cooper) eye. Both the men in her life are men who evidently take pride in their hair. The movie opens with Irving Rosenfeld (Christian Bale) in front of the mirror, doing his thang. In a near meditative state, he meticulously fixes tufts of synthetic hair onto his bald scalp by gluing and spraying them in place. In another scene later in the movie, DiMaso is shown wearing  hot rollers in his hair. This is nothing to take away from the effort gone behind the blonde nest created on Irving's wife Rosalyn's (Jennifer Lawrence) head.

While this may seem frivolous and funny to you - I won't disagree. But these are all necessary details which makes the movie what it is. From the beginning, it is all about getting it right "feet up" and so if that means getting your hair right for the role; you damn well get your hair right for the role! Whilst writing this blogpost, I came accross a few great article which shared the hair and makeup regime followed by the cast during the shooting of the movie:

For those who haven't watched the movie yet...don't read the links above. Instead, get your movie ticket or illegal DVD pronto. And for those who have, ladies and gents, let's get the groovy hair going pronto! Grab your hairdryer, put the hot rollers to heat and keep cans of  hair spray ready!

In the mean time, I am certain the Hustlers will sweep through the Academy Award winnings and enjoy a hair-raising awards season! 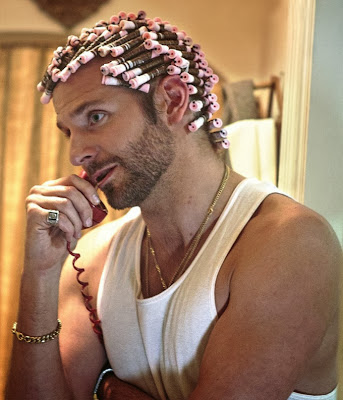