I could her my name being announced over the PA system urging me to rush to board the flight. The gates were ready to close and I was the only passenger that was yet to board.

Oopsy.
What was I doing whilst I ought to have been scurrying toward the gate? I was busy trying to gobble up the last of  my Andhra delights - Mysore sada dosa with a colourful array of various chutneys and gunpowder as the accompaniments. 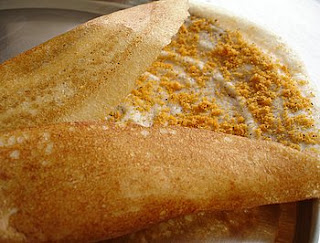 Oh well, I made the flight and despite the rush and panic, it was totally worth it!

In fact, my day and a half trip to Hyderabad was totally worth it. It was my second visit to the Andhra capital and although I was mostly confined to a hotel room; the excursions from Saturday night gave me a good idea of life in the Hills.
My brother in law is from Vizag and at the time my sister and him were getting married, I got my first jhalak into that region.

People make the place, 'tis is true and this applies in Hyderabad as well. Every one here is fairly simple, relaxed, and helpful. Be it the driver, who enthusiastically points out the local attractions to us or the hotel staff who willingly replenish our non-stop demand for the (free) cookies and fruits in the room or the Bollywoord-struck bangle seller driving a hard bargain on his shiny ware, or the strangers I met out at night who treated me as a part of their group.

For instance, on my last visit, I was complaining aloud how I had had no time to pick up packets of the gunpowder for my family and I was devestated by this! The next morning, a heavy parcel is delivered to me from my friend's mum. In the parcel were packets of the stuff in a variety I didn't even know existed! This time, a new friend of mine collected me and took me out. On an earlier conversation, she had mentioned how the night life of Hyderabad is nothing less compared to Mumbai and I better make sure that on my next trip to save a night to experience it. So this trip, she collected me and we went to "N Grill and Lounge." It was rocking! Forget that the Telengana protestors were rampant or that there was a city-wide transport strike, forget that it was the eve of Gandhi Jayanti and definitely forget that the standard Hyderabad night dead line is midnight....the night shone on.
"N" stands for Nagarjuna - the actor - he owns the place and I was ever-so-lucky to catch him and his crew partying at N. He may not be Arjun Rampal, but the place was better than Rampal's Lap in Delhi. The space is distributed into 3 distinct areas - the back with its sandy floor, has a more romantic vibe, the music is less audible and it makes for a great dinner spot. The middle area has a fabulous Champak tree serving as a center piece, around which the bar is designed. Finally the outer courtyard area has a big Buddha head (but of course!!) and this is where all the action takes place!

I got there a bit late, after a wonderful dinner at a terrace restaurant called "So". The food was so-so but the ambiance lovely. One could see the neat and compact city twinkling down below. Really pretty!

As I said, the usual time a club closes is 12 am, but I seemed to have added luck since N stayed open till 1.30 am after which all the Bentleys, Cayennes and Audis headed to Begum Pet for an after party. Now this is where the real partying happen. In the privacy of their wonderful homes, the Hyderabadis crank it up and go wild. Known for their love to dance, the Hyderabadi guys shake it and sweat it out on the latest tracks. Finally when it hits 5 AM, the same cavalcade heads back into town to "finish the night" with dawn dining. And the food of choice is (obviously!) Hyderabadi biryani!

Well I skipped the last part, to save it for my next visit. The next day I did however, visited a Hyderabad must-visit joint- Fusion 9 (or F 9 in local lingo). It is Hyd's version of Indigo. The Sunday spread was terrific....very original array of salads (Tendli salad anyone?) and I also sampled a bit of the world-renowned spicy hummus and khausey (a let down).

The best meal however was at the Taj Deccan - Spice Junxn. If you like Andhra khaana then this is where one should go...amazing food!

With a take-away parcel of biryani firmly in hand, I left the city feeling well-fed and well taken care of...can't wait to go back!