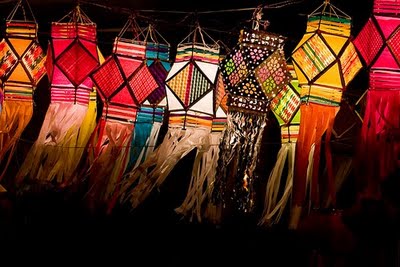 Dhanteras is here commencing the official 5-day Diwali Dhamaal...for a city that really doesnt need any real reason to party, this is another one!

Must say that this Diwali has been rather thandaa, with not that much of shor-sharaaba and dhoom-dhaam. Usually the city is flooded with fairy lights - from stores to homes to even the small shanties all lit up with strings of flashing lights. Even the humblest of humble of homes, has a solitary diya at the doorstep; burning the night away signifying that no matter how bleak the situation, there is always hope.

So why do I find this Diwali so lack luster? Why am I so out of it? Well, the usual palpable Diwali spirit is definitely not in the air. The infectious feeling of bonhomie and good cheer is lacking. Now, people tend to use the long break to break free and leave the city scapes. It used to be people coming together to celebrate, now it is people getting away and finding solitary comfort and solace. So by default, the city has fewer people in it (which actually, is never a bad thing in Mumbai!) and festivities have decreased.
Given the volatility of all the markets, economic activity isn't exactly the same as it usually is, either. Traditionally, Dhanteras is when the Gold and Silver rates sky rocket, as demand jumps to crazy heights. But this year, gold and silver rates have anyway reached unprecedented heights since the past few months, leaving most who have invested, kadkaa...with not that much surplus to buy this festive season.
Speaking of soaring rates, even the phatakaas are ridiculously expensive! Not that I mind, since I am not the bigegst fan of the noisy fire crackers; ladis in particular. I can not understand what "joy" people receive lighting bombs and the like - as if we dont live in a noisy, messed-up, war-torn world. Aren't there enough of the real bombs exploding else where that ought to put us off this stuff?!

My mum was definitely not pleased by my lack of enthusiasm and effort this Diwali and remarked to me the other day that I hadn't even paused from my "busy" life to take part in the usual festivities at home.She made sure all the lights were put out,  the colourful paper kandils were flying in the gentle Arabian Sea breeze, the toran had been put up, the deities had been dressed in fresh flowers and every one in the family had a new outfit to mark this important day.

Out of utter guilt, I determinedly took on the job of buying the Diwali faraal items yesterday. The only task that had remained pending and a task that she loves to do as it takes her to her favourite part of the city - Girgaum. Amidst the hustle and bustle of the busy streets of Girgaum, is a tiny little store, Satish Ladoo, where we buy all the maharashtrian/gujju items from - jars filled with boondi ladoos, besan ladoos, karenjis, sahakar pali, tikhat sev and the like, ensure that all our regular dietary patterns are done away with!
When I went there last evening, I first went with the mere attention of completing a duty - pick and go! But when I reached, I was instantly softened by the mood and atmosphere there. It was exactly how it usually was - busy, bright and festive. It was nice to see families dressed up in their best, talking excitedly, collecting last minute things, laughing and essentially enjoying the holidays...it was a moment that I got a bit of a reality check and a moment of "putting all in perspective". It was the simple life, the happy life.

So now that I am feeling appropriately festive, I am gearing up for my first Diwali party of this season. A party started by a few class friends and that is soon acquiring an "annual" status. It ought to be veryy fun!

Next on my festive lineup is the F1 in Delhi - vrrrooom vroooom vroooom..! I am no F1 fanatic that is for sure, but I have been very keen on going to the first ever Indian F1. I am sure we will put up a super event. I believe I have very good seats near the flag off, and after the pit stop....but what has gotten me most excited is that Lewis Hamilton will be there sans the pussycat doll!
;)

I hope for a truly prosperous and bright Diwali for all of us. Make sure to turn on all the lights!