Falak-Numa: Mirror Of the Sky

Haunted by the music of Coldplay that I have been listening to on my iPod for the past two days, I aimlessly drift through the wondrous corridors of the Falaknuma Palace, completely lost in the beauty, décor and details around me. 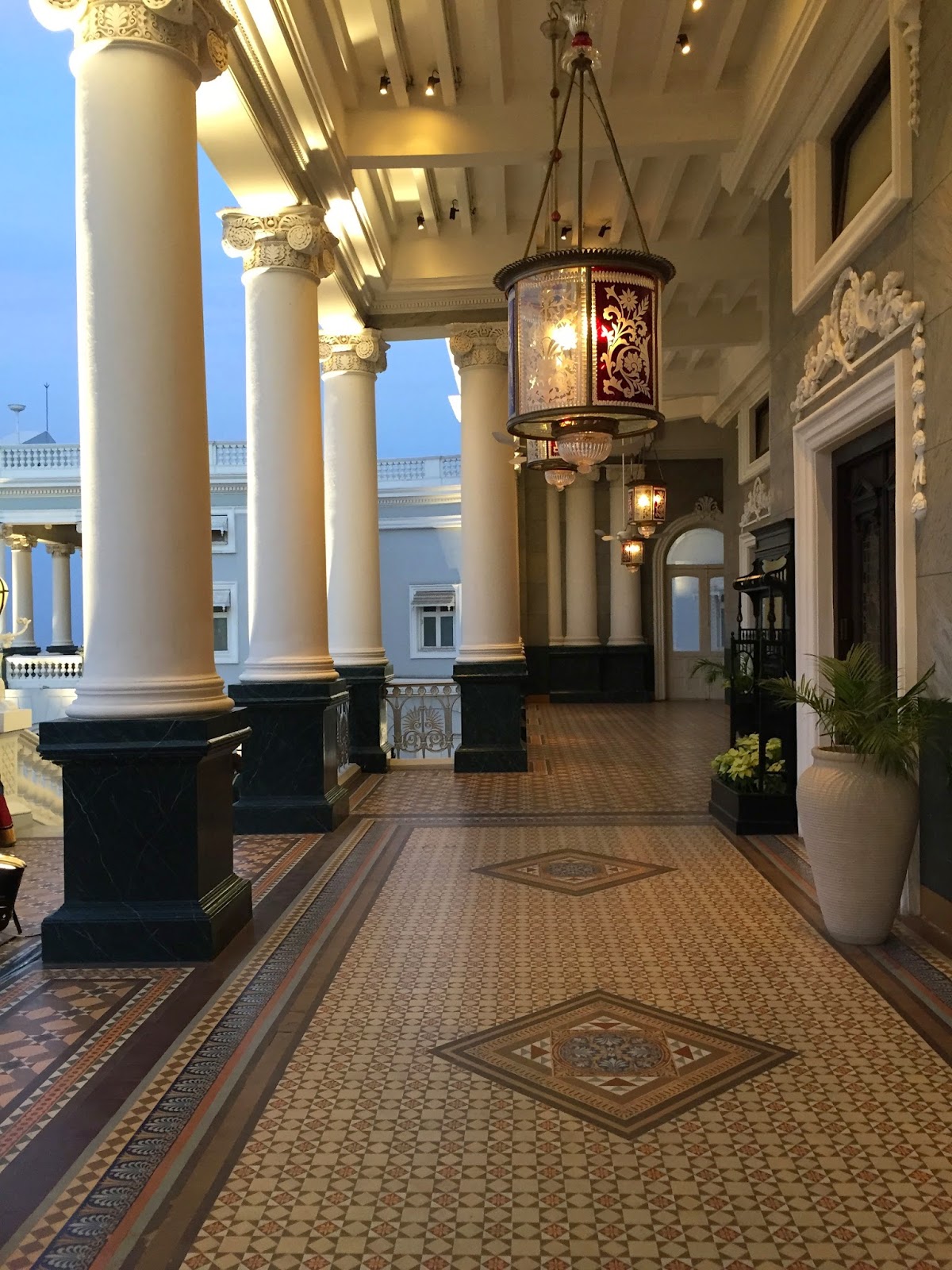 It is one of those perfect sunset moments. Standing at the edge of the balcony; it is impossible not to feel elevated by the grandeur of the location. At a height of 2000 ft. above the old city of Hyderabad, one can see the Old City distinctly recognized by the Charminar tower in the distance. This is a property so very different from the many beautiful palace properties in Rajasthan, owing to its architecture, interior design, rare objéts and of course, its unique history and incredible story. 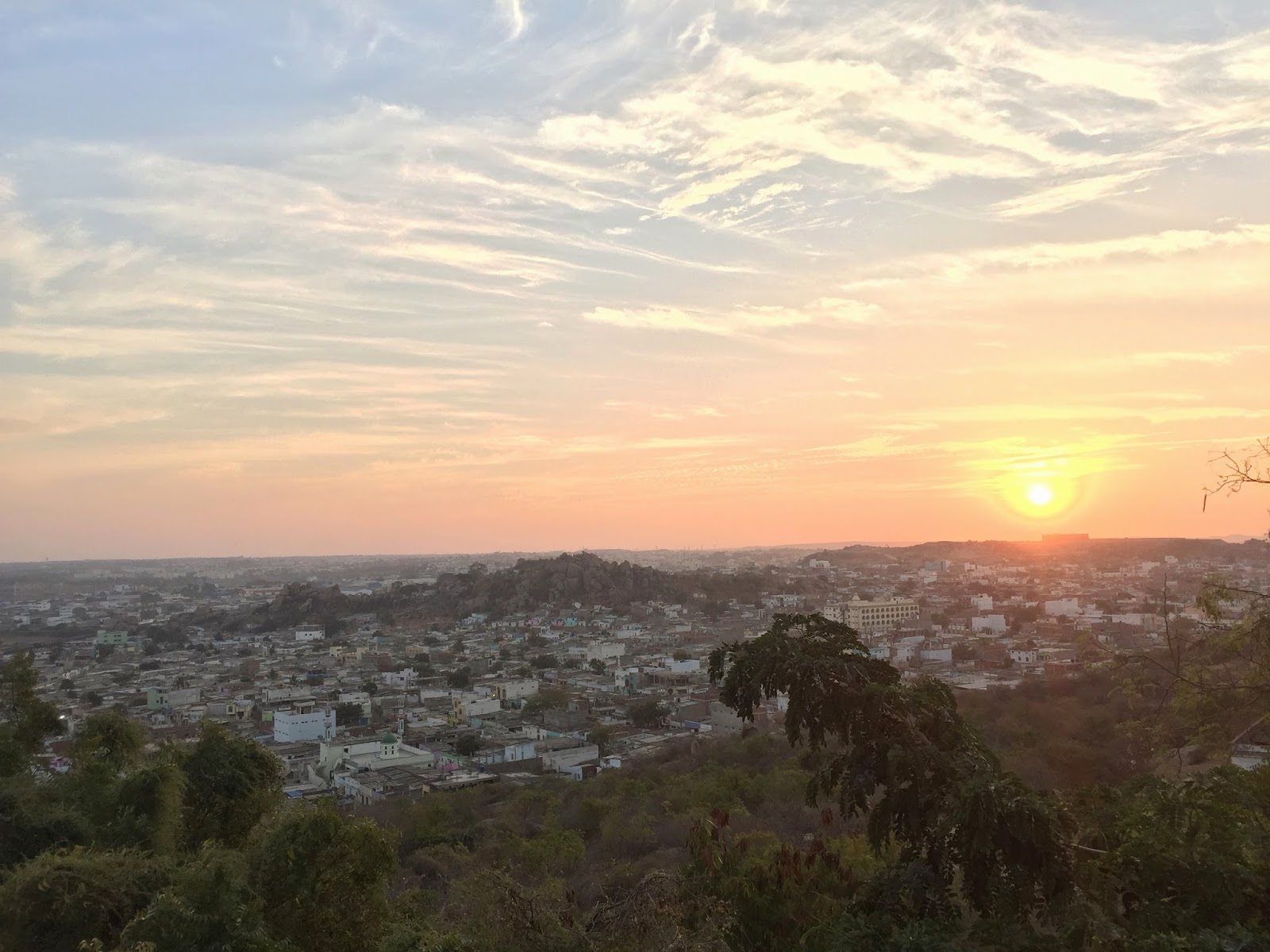 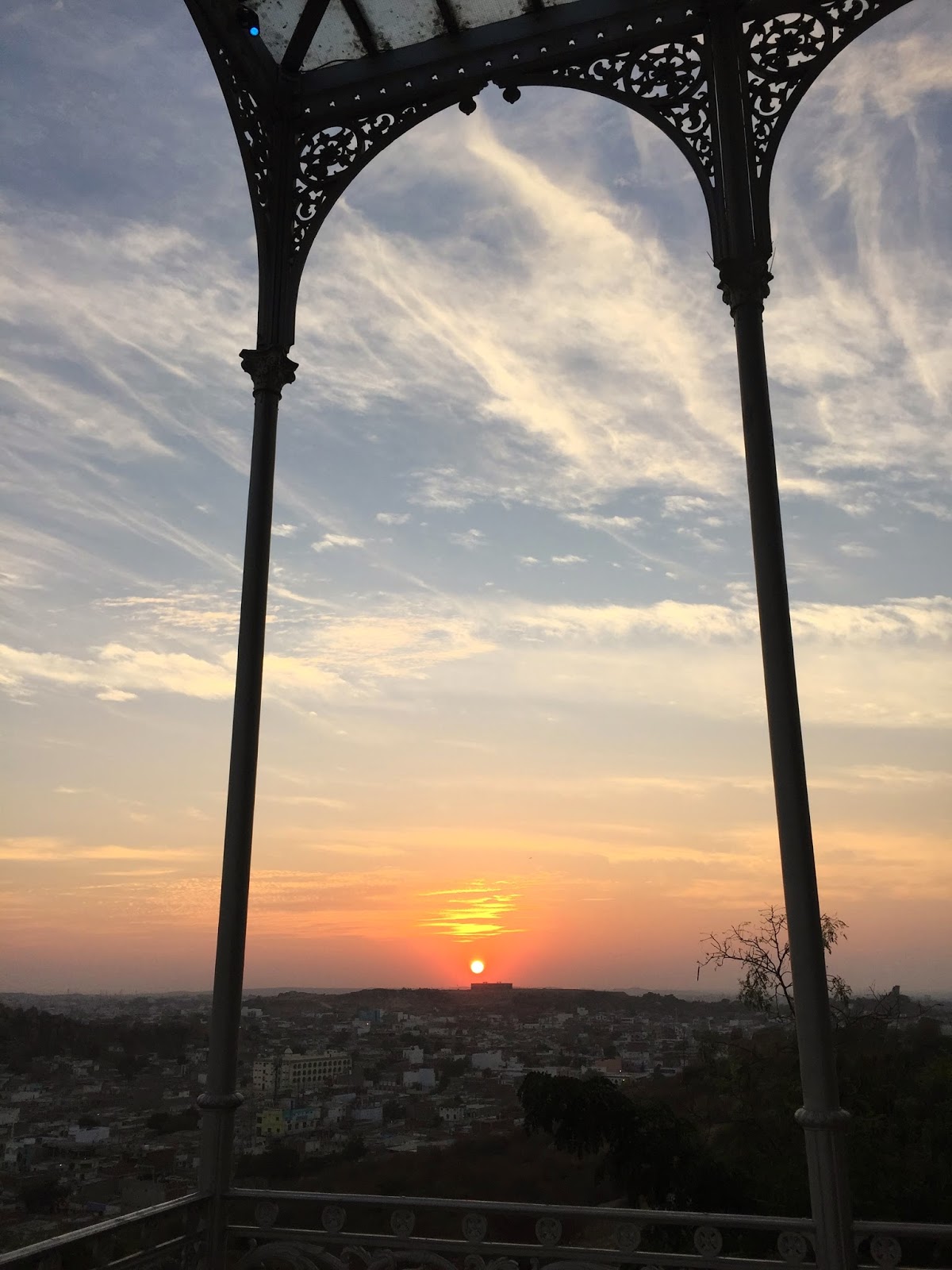 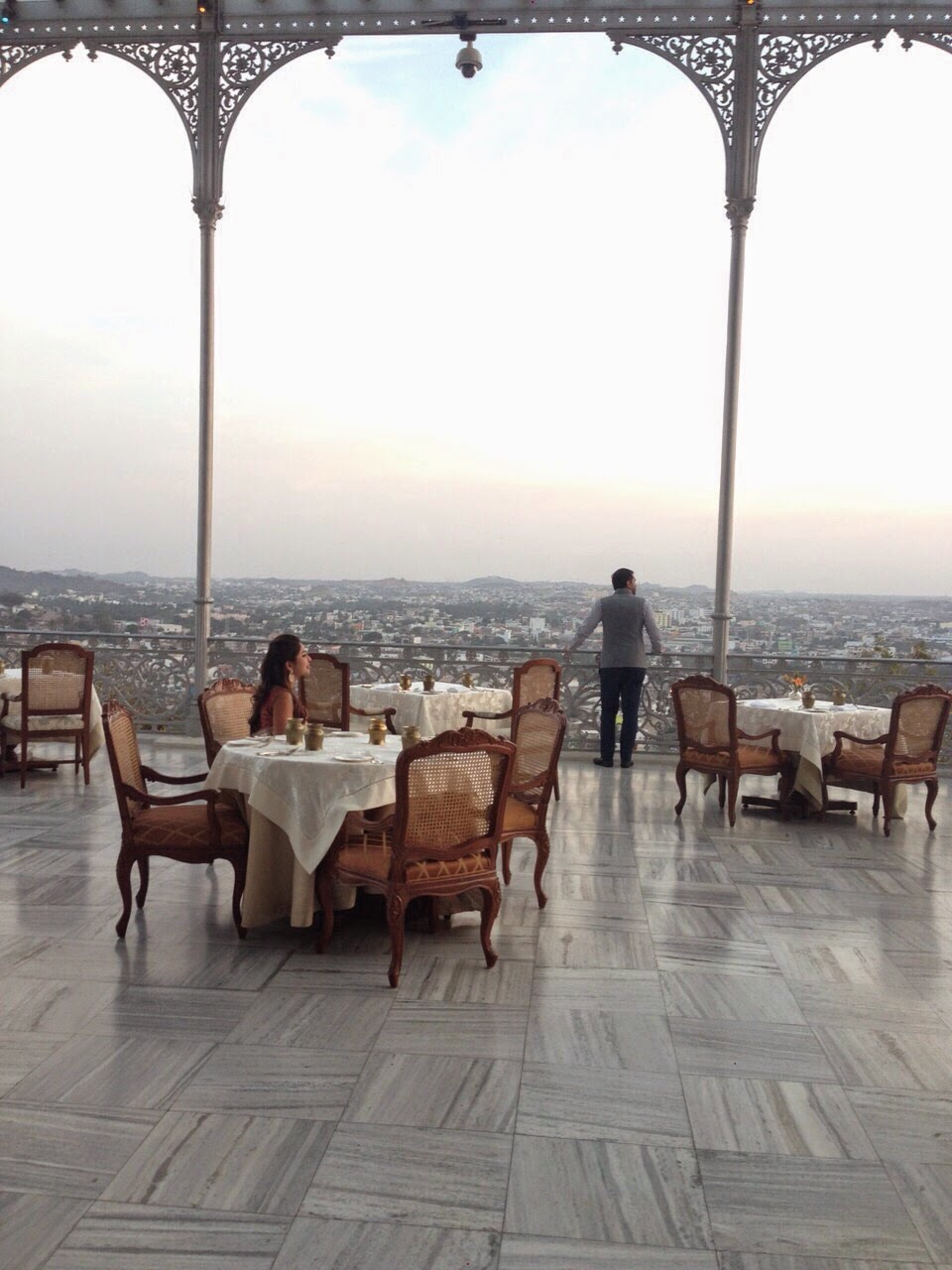 Laid out in the shape of a scorpion, Nawab Vikar-ul-Umra (birthsign: Scorpio), the Prime Minister of the Sixth Nizam started building it in 1893 as a lavish residence for himself, the palace took 10 years and four million rupees to complete, back then. The foundation stone was laid in 1884, but the building wasn't completed for almost another decade. In that time the prime minister was forced to borrow funds to finish it – money he had no chance of ever earning. The story goes that to save face his wife suggested a shrewd plan. Inviting his master Mehboob Ali Pasha, the sixth Nizam, to stay, the prime minister waited to be extolled for creating such a glorious pleasure dome. And when the praise was lavished, Viqar ul Omra offered the building to the Nizam as a gift. Accepting graciously, the ruler reimbursed the full cost – a pittance to a man of such colossal wealth.  (http://www.thehindubusinessline.com/features/smartbuy/luxury-and-fashion/article1121289.ece)

Marble Skies as seen from the inner courtyard
Watching the sun set languidly into the cityscape, and hopelessly enjoying being bathed in the glorious, divine light, I was transported to another era. An era of pomp and splendor, extravagance and beauty, art and perfection; of tehzeeb and khaandaan. Our generation (for the most part), has been prey to the pitfalls of rapid urbanization in our cubby holed existence. For us Mumbaikars, we remain confined to choose between small apartments at exorbitant prices. Most of the modern buildings and construction projects that tower into the sky are eye-sores, with little regard to design and aesthetic. I too, live in a tall building but it’s location and view makes up for a lot! Fortunately, my neighbourhood is dotted with old colonial homes and structures, some of them tucked away in hidden, leafy by-lanes. Most of them are crumbling and decaying, but there are some that have been restored painstakingly. I silently thank the owners of these properties, each time I pass by, for they have invested in heritage and history. From Cuffe Parade, I drive to work, which is in Lower Parel (or are we calling it Upper Worli these days? I really am not sure…), which depicts all that I don’t appreciate in modern development. Ugly buildings that have come up virtually over night, razed trees leaving spaces devoid of greenery, uneven roads, unplanned neighbourhoods and massive, overflowing garbage dumps that dot the area to be viewed as pieces of sculpture!!

I understand the expense and labour and meticulous approach required to build something. The Taj took 10 years to renovate the palace into a palace hotel. Unlike most palace hotels that have been newly built or simply redone, this one has undergone intensive restoration by the Taj group, under the very guidance of Princess Esra Jah (royal consort of HEH Prince Mukarram Jah Nizam Eighth). After a hiatus of about 60 years and ten whole years of restoration later, it is finally set to welcome guests into its marvelous structure, rechristened The Taj Falaknuma Palace.

I enjoyed the property as the curious, awe-struck visitor when I was there last weekend for a wedding. The lucky couple had meticulously planned their wedding in this palace venue and the marriage proceedings were nothing short of Magic for all those who were a part of it. The first night was al-fresco in the oval-shaped inner courtyard with music and dancing under the stars! It was impossible not to feel alive and enchanted when one was surrounded in such an atmosphere. Post midnight, the dancing continued into the Coronation room or as I prefer to remember it – the Red Room. Quite the spot for an after-party, wouldn’t you say?

The wedding ceremony took place the following evening at dusk and once again twilight cast a spell on the guests as the sky turned from a hot, white to a burning orange, then into a tangy red and finally the colours dissolved into a inky blue. The post-nuptial celebration took place in the lawns with the spectacular palace as its background. Between the celebrations, many guests took the 45 minute long palace tour where the guide shared anecdotes and details on the property and its elements of royal finery; making the time spent there more meaningful.
If I had to choose, I would perhaps choose the Jade Room as my favourite space – marrying French sophistication with art deco design motifs and Chinese-Oriental jade antiques, I could have sat there and day dreamed for a long time to come.

As a modern Indian, there is much to be proud of in terms of heritage and past glory – I certainly hope more enlightened and moneyed individuals and enteties step forward to partake in restoration projects before it is too late. We are rich in every artistic resource – past and future – now would be the time for people who have been bestowed with talent and resource to come forth and work towards making India a better place to live in. Basic pride in even our personal domicile would be a super place to start! (Gosh, I didn't realize I was unconsciously campaigning the Swach Bharat Abhiyan here…)