The girl who went missing

Hello? It's me. Yes, I know I have been away. I was traveling, but I didn't get too far. I hope you don't mind, since I have just shown up here, completely out of the blue. It is a little late; but I wanted to check in with you none the less. It feels good to be here. So please may I stay, just for a short while?

So much and yet so little has happened since my last blog post...where do I begin? There were so many times that I was dying to write and then the feeling would pass by quickly. I have been thoroughly in-disciplined about it.Truth be told, I have developed cold feet too. I thought it would be difficult to move on from this long period of silence. As I type, I'm hoping for my fingers to warm up slowly yet surely, and let them do the work.

I have been traveling a lot for work and today I find myself hurrying (as usual), to make my train from Delhi to Ludhiana As I sit here on the train bound for Prosperous Punjab, I am hopeful. Hopeful that the exhibition goes off well and we do well. Not sure this place is all that it is cracked up to be, but sure as hell hope so and hope is all we have right?

It has been a long time since I've been anywhere on leisure and my mind keeps wandering to places that are calling out to me.

On my dream wander-list is the holy city of Benares. A city I have been longing to visit for a while, but particularly so, in the last one year since I learned about the wonderful festival of Dev Diwali (Diwali of the Gods), from a friend of mine, who has celebrated it there last year and had had the most enchanting time. The idea got reinforced when my mother was working on an initiative to rehabilitate and revive the dying art of the gorgeous Benarasi weaves, as part of a project spearheaded by the TATA group. Watching the priests perform the aarti on the faux ghaats, created in the ballroom, I got lost in the smell of the powerful dhoop, that filled the space and created such a serene atmosphere. If I felt so strongly in this setting, I wondered how I would feel when I actually was at the edge of the Ganges, preparing for my virgin dubki into the holy water! Clearly, it felt as a bulaava, which I am sure will be realised some time very soon. 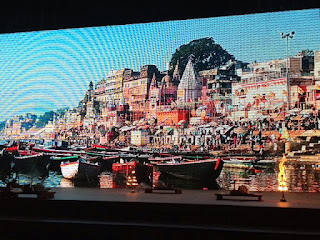 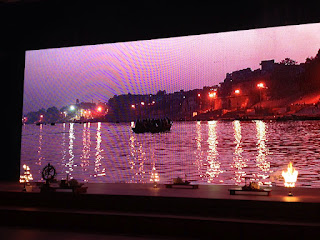 From the Ganga to the Seine....Ooh la la, Paris is calling - the glorious October skies, the sharp nip in the air, the wonderful fleuristes lining all the streets, and of course, the pungent smell of a mix of cigarettes and heavy parfum, all around! Oh! how I crave for a week in the city of coffee and croissants so, so much. Especially since so many of my besties are visiting there right now.

Ms. Groover has left us behind in Mumbai and is merry-making and embracing her new life at INSEAD. Her present life goes something like this: study, group meeting, drink, party, recover,eat, drink, sleep, study, recover.  You get the idea? And when she is done with that, she jumps into her car and whizzes into Paris. And after an adequate city fix, she zips back to Fontaine Bleu - the land of Napoleon. I believe this French Miss is getting set for a weekend in Switzerland...on a school assignment, she says. I think otherwise!

If that sounds like too much of work, then Naima's plan, may be more up your stream...she is back in Paris, after a giddy-heady 2 months in her home town of Maddy (Madagascar), where she has gotten engaged to her long-time beau. What better way to prepare for a life of marital bliss, than by honing the art of sweet-toothing! Chapeau, Naimu, the smart girl has figured that the surest way to a man's heart is through his stomach. Lucky guy! I have not only had the chance of sampling many of her culinary delights, but have had the greater chance to watch her whipping up a storm a la cuisine, back in her delightfully sunny kitchen in Paris. Who wants Nigella, when you have Naïma?


And finally, Ms.Melanie Shah is getting set for her first visit to Paris and has Gotham, for good company. Mils has approached this trip with scientific precision, not leaving much to chance. 2 months ago, she was facing a massive confusion in her mind on which hotel to pick, and sent me an SOS email to help her clear the confusion. I said yes of course, and soon received an excel file, with a list of short-listed hotels, with various rating scales and a 'final comments' column for additional info. Wow! This was definitely more analytical than many of the projects I did at work, but I made it through and sent her back my 2 top choices. At this moment, we get on the phone to finalise The Hotel. It all boiled down to one simple quandary : should we pick the famous one in chic St. Germain or go for the one in convenient Opera, which includes a free bottle of wine as well as a museum pass?
Obviously we picked the latter!
If I were in Paris right now, what would I like to do the most?? Well, I would definitely grab the museum pass and visit the Van Cleef & Arpels, Haute Joaillerie exposition at the Musee des Art Decoratifs where 400 pieces that have made the fame of Van Cleef & Arpels since 1906 are being showcased. Truly a spectacular and extremely special collection of some of the finest crafted jewels!

Although I am most certain that the City of Lights will bewitch Mils and G, it now seems the only thing left to chance is if Mils gets time for some retail therapy, and this one Gotham decides!

Well, so where does that leave me, I forget? Ah right, back to longing and lusting. For the moment, I guess, I will have to make do with the land of kulchas and cholle. And perhaps, a patiala or two, will knock me out of my state of nostalgia and reverie!

Back to the train ride, iPod in hand, song for this moment - "oye lucky, lucky oye!" 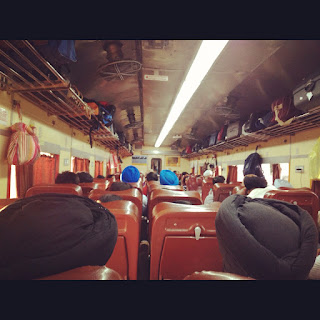