I cant contain myself any longer, and now that the opening weekend has passed, iI’m able to spill the beans on English Vinglish.

To begin with, let me answer most peoples’ first question: Yes, Sriji is absolutely terrific. Miss 420 delivers a real, honest, believable and strong performance in her come back movie. She plays Simple Shashi will utmost grace and dignity, being true to her age and stage in life. It would been trying to say the least if Sri had decided to return to  the big screen as a a chamak-dhamak cheez, clad in a tight dress and wearing tall heels. It would have been easy for her to have believed that she could have pulled off such a role too, given her real-life avtaar is ultra-glam - she still has a “fab bod” with those lissome limbs, the glossy curtain of hair, clear complexion and those big, bright, animated eyes.Those very eyes, that got Laurent at first sight.

Lover boy Laurent, one of the main supporting characters cast as the classic French lover and as Shashi’s biggest classroom fan. And as the sigh might have implied, he is a real dreamboat. Playing a French chef, who finds himself in mid-town Manhattan, cooking at a restaurant but struggling with communication as he can’t speak “the good English”. Laurent encounters a nervous Shashi at the cash till of a cafe, struggling to order herself a sandwich and a coffee (all she wants is a humble Nescafe, but she is offered instead is the choice between an Americano, a Latte, a cappucino or a mocchacino). Shashi is bring given the third degree by an increasingly angry big momma at the counter, at her in-ability to place the order fast enough. As the scene unfolds, Shashi is found stuttering, mumbling, stumbling and rushing out of the cafe in shame. She goes to a bench some distance away where she breaks down and is sobbing.

“Madame, zees eez your cappucino that you order” (please note the pronunciation and grammar). Shashi looks up and their eyes meet. Still dumb-founded, she takes the cup of coffee that he offers and they part ways...and as they say, the rest is history.

Well, not really because this isn’t your usual hindi movie jahaan kuch bhi possible hain...So as it goes, Sridevi is in the Big Apple, to help her widowed sister plan a changla Maharashtrian wedding of her daughter to a godd Amrikan mulga. This is the first time that the largely unexposed and inexperienced Shashi finds herself far, far away from home (Mumbai), all alone in a big city and apart from her only life (husband, kids and amiable mother-in-law). If not stating the obvious then, Sridevi’s character doesn’t speak a word of English and has faced sufficient humiliation by her little daughter and annoying husband for this, over the years. To make it worse, she is now here, and can’t get around because of it. She is however in the loving company of her sister, who was also like her once upon a time. But life and circumstance smartened her up in to a perfect NJ mother of 2 bubbly and attractive girls. Shashi’s younger niece, is a sensitive and loving girl, who understands her maasi’s need of emancipation from her own inhibitions, particularly that of her disability to speak English. Together, they share a little secret, and Shashi enrolls into a 4 week crash course in learning English. It is in the confines of the classroom and in the company of her classmates, that the character of Shashi comes into her own.

The first important breakthrough is her being called an entrepreneur by her professor, when she describes that she makes and sells ladoos from her home, back in India. It is for the first time that she has been regarded with a molecule of respect - a feeling she has never known since her kids and husband made her feel like nothing on earth. She is merely a lady, performing her duties as a home maker - a role so very important to the fabric of family life and society at large - but regarded as thanklessly by the people she has devoted her life to.

Essentially the movie highlights one of the most important human needs - that of respect and dignity from the people one lives with.

In a matter of 6 weeks, Shashi’s character experiences life hitherto unknown to her. She changes a lot, but not that dramatically that she is suddenly transformed out of saris and into sneakers and playing a cool Americanised soccer mom. But the changes are shown subtly, delicately and believably. As I said in the beginning, Sridevi plays the roll of this lady poignantly and perfectly, never going out of sync with the character. This is wonderful to see, and I am sure that the highly talented writer and director of the movie, Gauri Shinde had a lot to do with this. Gauri Shinde has developed the character of Shashi from her own mother who faced similar treatment. Once Gauri had grown up, she had realised how often she must have hurt her mother...this premise was strong enough for her to be convinced to make a movie based on it. Perhaps this is the reason why Gauri has got all the little details in place - even small gestures, nuances and character traits have been woven in so beautifully into the script. To add to that, the casting is excellent, with not a single character out of place or over-done (least of all Laurent, sigh again).

My only grievance was towards Shashi’s husband and the lack of explanation towards their reason of union. One wonders what he saw in her to have married her, given the great difference in not just their personalties, but even in their educational qualifications. Perhaps, it was her culinary skills? But this is just an assumption.

The tender tale of Shashi’s parivartan will have universal appeal - for there is a Shashi in all our lives. I would urge as many people to watch it as it is never to late to recognise the value of the Shashi in his/her life and treat her differently - the way she deserves to be. 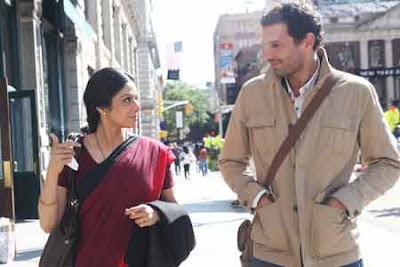