I have been in Mumbai all through March, and I dare say that it has been a vibrant and activity-filled month. Some would even say, it has been hot and happening.


First up - the jewelry house I have worked with since 2010 opened its flagship boutique in Mumbai amidst great pomp and style in Kala Ghoda. The NIRAV MODI boutique is housed in a beautiful heritage building and the space has been used cleverly and stylishly, reflecting the aesthetic vision of the brand's creative head Mr. Modi.  The novel use of space must be attributed to another creative genius, Spanish-based Jamie Hayon (pronounced “Haymee”). But most importantly, the jewels have found their rightful place in the creative display vitrines with intricately crafted paper art. It is a matter of great pride that I look forward to welcoming guests and friends to the boutique, knowing that the jewels on display in this wonderful setting shall enthrall them. 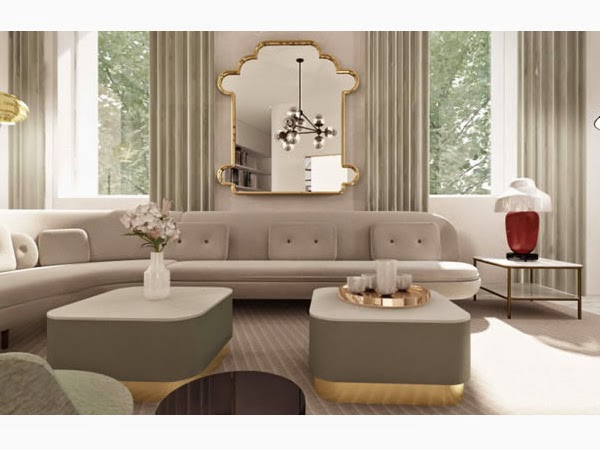 Kala Ghoda is shaping out to be a great address for shoppers and city folks to hang out in, with its quaint pedestrian streets, terrific eateries, chic boutiques and of course, art galleries a plenty. The periwinkle-blue synagogue in the heart of the district makes for the perfect picture postcard. The city's oldest music store, The Rhythm House has also spruced up its facade with an eye-popping blue and yellow coat of paint. With many age-old haunts like Khyber, Chetana thali, The Golden Thimble still holding their own, I hope the area continues to flourish and attract more stand-alone entities to add to its collection. It is the one part of South Mumbai that has an eclectic energy to it with such a diverse offering. The edgy-artsy-hipster vibe is definitely what the city needs and I am most glad that it so close to home! For my parents and their friends, the closing of the Cafe Samovar in the Jehangir Art gallery has been the source of huge waves of nostalgia and sadness as it closes down after 50 years of service...Alas, hopefully it signals the beginning of something new and wonderful none the less. 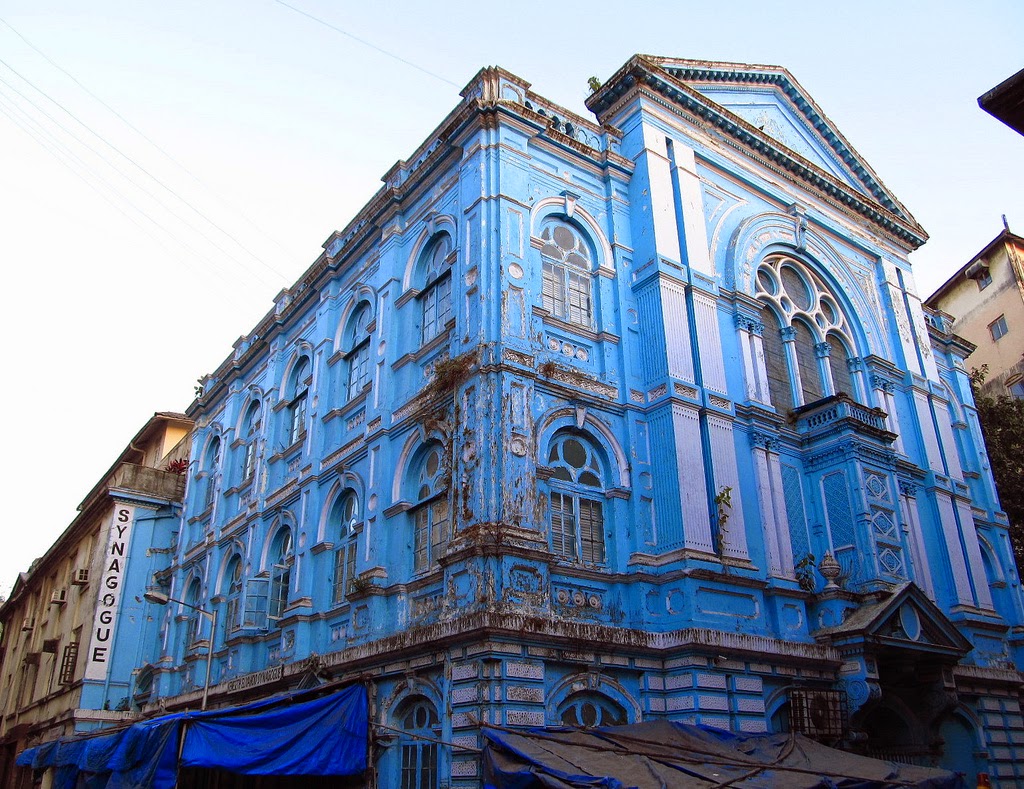 Sabyasachi's resort show was at the (now) defunct and iconic Richardson and Cruddas warehouse two Sundays ago. What the collection lacked in terms of the Sabya touch was amply made up by the drama of the unique location and the star-studded front row guests. Sabyasachi epitomises success in contemporary Indian fashion wear for Indians in India and elsewhere and continues to hold fort as the leading bridal couturier. The show was a sharp departure from his usual style; say the critics, but in my "fashion outsider" eyes, it was quite simply, blah. Most blah were the gawky, awkward models, who walked for him - poor body language and catwalk style. Was Sabya making a subliminal statement of “Let's mix it up”, with the unexpected psychedelic laser light show and the 70’s retro remix music that replaced the antique chandliers, mogra-infused haze and Satyajit Ray music? 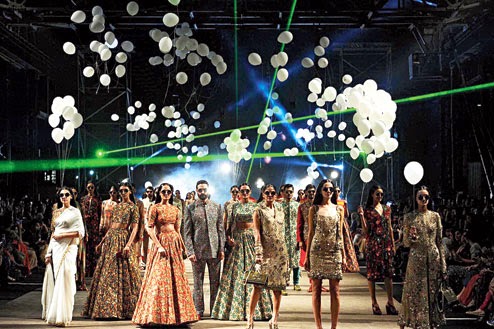 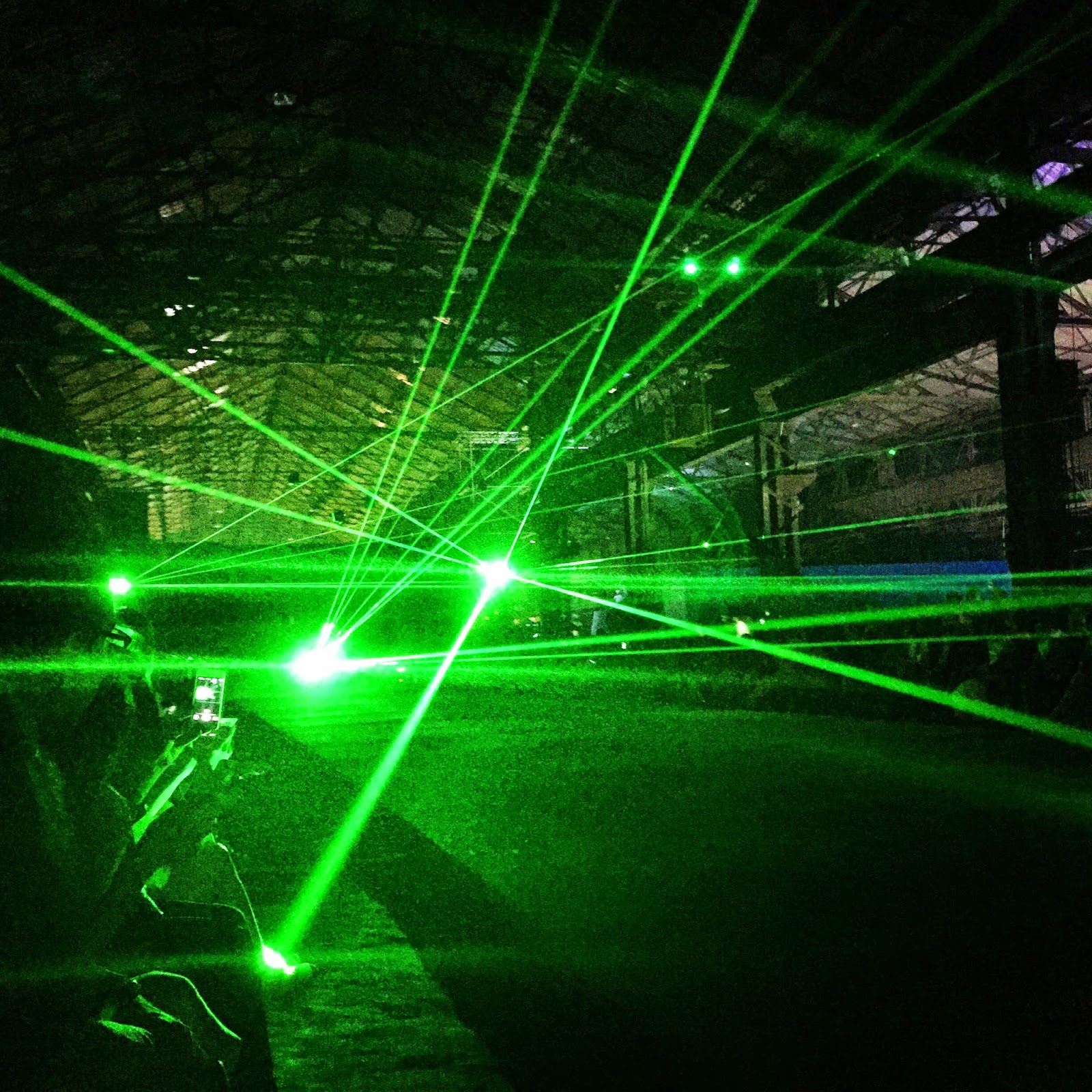 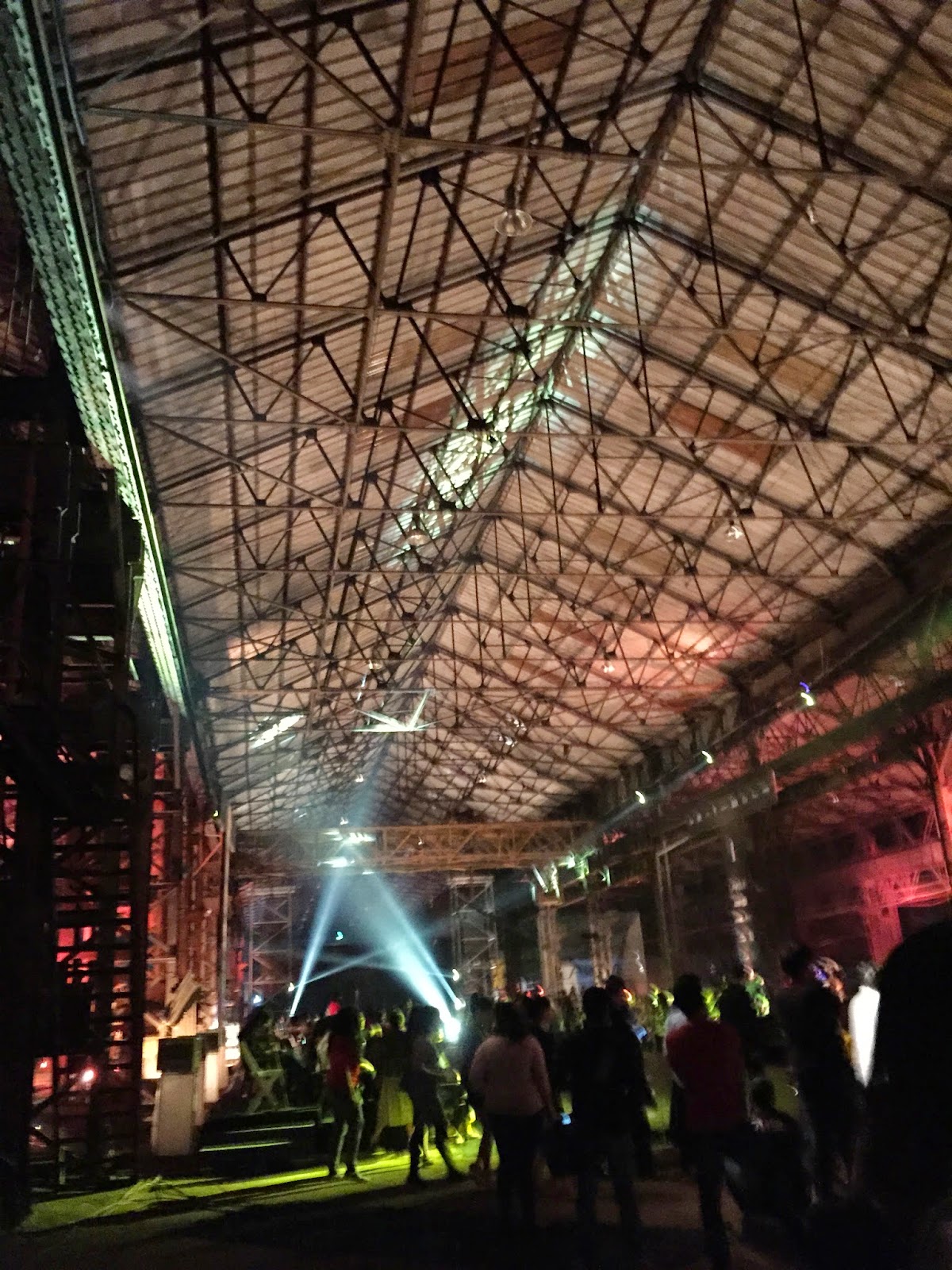 Speaking of organisation, Anamika Khanna was the closing designer for the Fashion Week and three hours before the show, political goons came and shut down the show at its original venue - the spectacular Bhau Daji Lad museum.


But, the Show Must Go On and contrary to their violent and regressive vision of the political mafiosi, the fashion fraternity showed a harmonious and productive spirit. The show venue was changed to the Palladium hotel lobby and the entire production and choreography had to be changed, naturally. All the guests still came to show support and feast their eyes on the ethereal garments. Sure, there was a long delay and a poor execution of a new seating plan, but when the show eventually started, all these hassles were forgotten. African Goddess meets Earthly Nymph was the look and the feel of the models with their dewy, wet hair, red wine stained mouths and strong eyes. Designed by AK’s equally talented sister, Suhanie Pittie, the accessories were very eye-catching.


The rest of the fashion week continued on at the new venue - the Palladium Hotel and I did happen to see a few more shows of young designers presenting their work on the New Talent runways. Afterwards, walking through the stalls, I was just amazed at the powerhouse of talent they had. I saw such great work and workmanship in the garments on display. The Indian hand is golden in my opinion, and it angers me when I see the great Western design houses borrow so greedily into our deep talent pool. Buying cheap, only to sell it back to us...! When will we learn to show pride in our metier and ancient know-how? Mostly, when will we have the discipline to make a uniform, international level product. I don't mean to lament, because I do see a sense of organisation kicking in (Nirav Modi, Sabyasachi stand as case in point) and I look forward to strolling down the Avenue Montaigne's of the world and spotting Indian brands commanding top spots in the international retail map.

Stand-alone eateries are much welcome in Mumbai, especially when it is not just the vibe of the place that is cool, but the food is terrific. The latest addition to the local food scene is The Bombay Canteen at Kamala Mills. Opening 6 weeks ago, it is impossible to get a last-minute reservation here and the aam janta’s reviews on the food have been terrific. So it became the restaurant venue of choice for a big, fat family get-together on account of my New York-based sister’s milestone birthday celebration. Arriving there a little bit before the reservation time, I was tired-famished-thirsty all at the same time. The restaurant was buzzing with all the tables occupied and the bar was busy too. Finding myself a spot, I grabbed the menu, which resembled an accounts ledger (taking me back to my school days – Accounts was my favourite subject!). A quick scan of the cocktail menu, I picked the Tar-Booze (vodka, watermelon juice, kala namak) and then pondered over what appetizer to pair it with. I didn’t need to ponder too long as I was approached by a server carrying a tray of “pick-and-eat” bites, adorably called “Chintoos” priced at a swet Rs.40 for the vegetarian (lotus stem fritters with chaat masala) and Rs. 60 for the non-vegetarian (Deviled eggs served in the egg white) selection. How clever was that! Hungrily attacking the bites and washing it back with the yummy drink, I was quickly relieved of my earlier disposition. When the rest of the group came and we were seated at our table within the art-deco inspired glasshouse, the chintoos were ordered by the tray! The final verdict was that it had been a superb meal – the Raan was the clear winner and warranted its 24 hour advance order. For me, the banana leaf steamed snapper and the thepla tackos were the winners, not to mention the ridiculously humble coconut rice, which I could eat sans accompaniments. My only grouse was the poor acoustics and high sound level that rung through the period I was there, definitely making it impossible to enjoy a polite dinner table banter. I nearly lost my voice on account of bellowing over the music level (perhaps the icy cocktail played its part too). I look forward to discovering the rest of the menu, especially the dessert section, soon and wish the young, talented team behind this venture tremendous success.
( A good review can be found at:http://www.livemint.com/Leisure/zk2mYgKTdBMCfQ8it8yJCK/FOOD-REVIEW-Bombay-Canteen-Mumbai.html ) 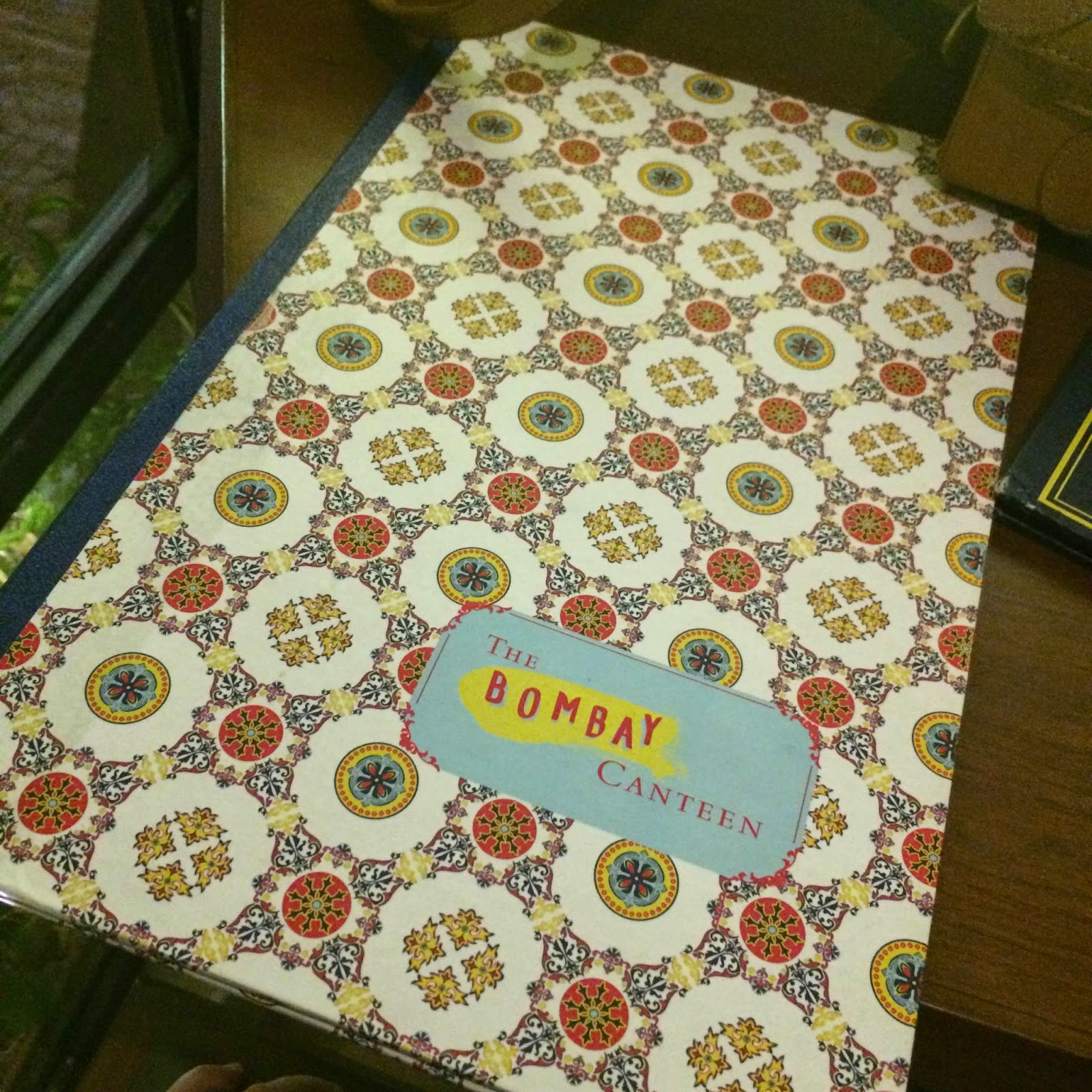 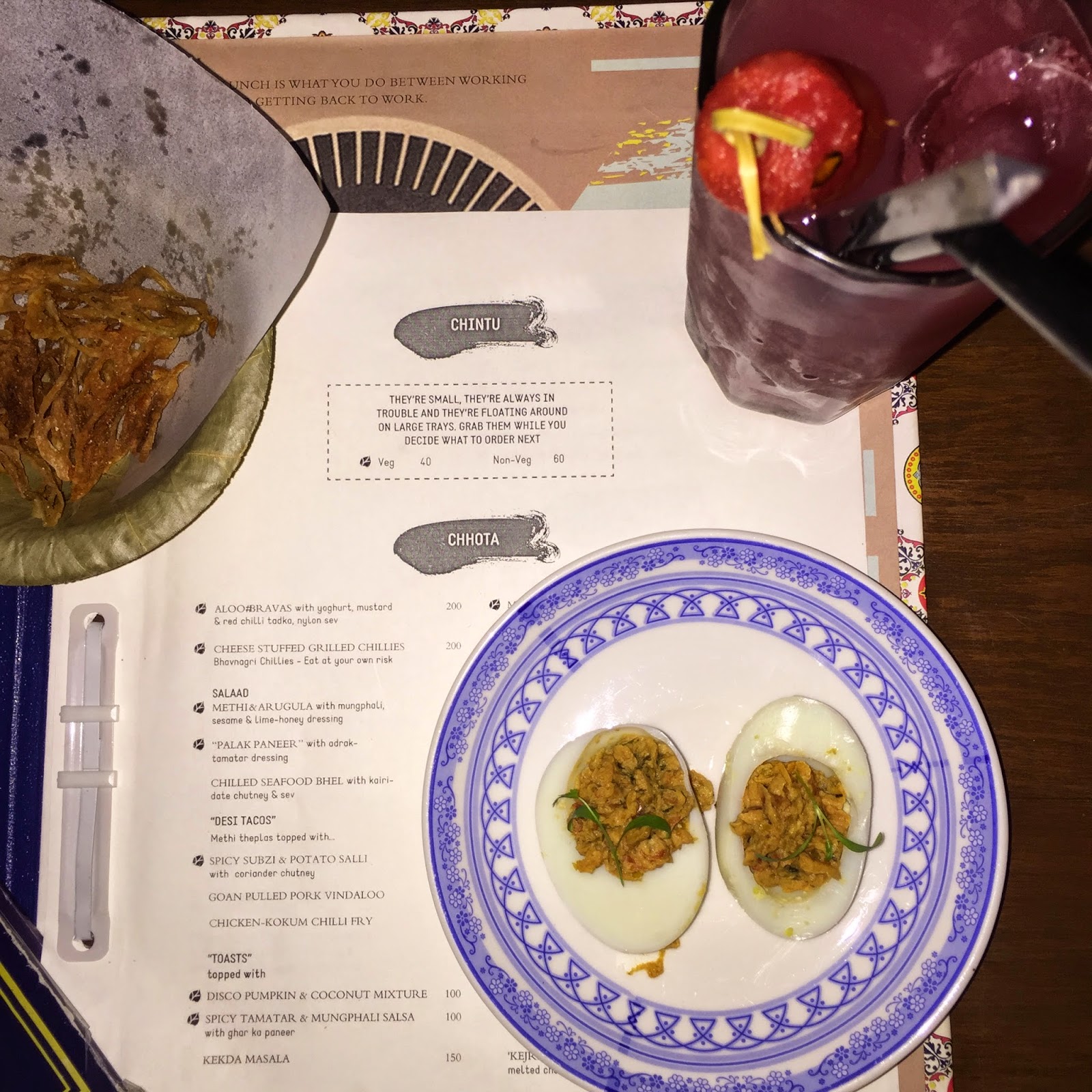 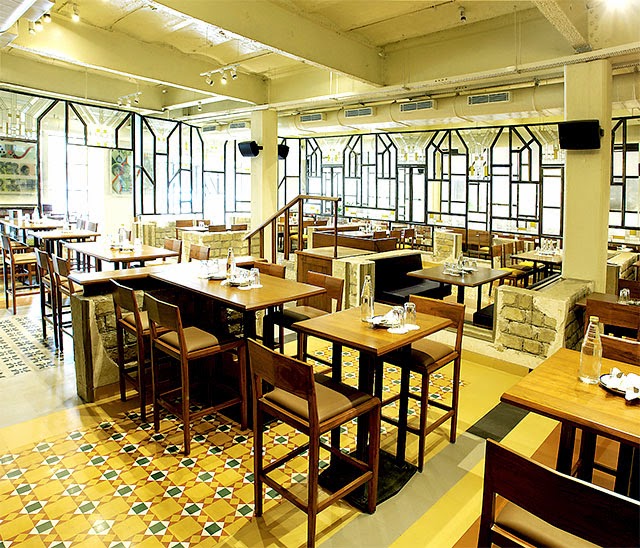 And slowing down the manic month a tad, was an evening at the movies (Inox of course!), whilst eating popcorn and watching Cinderella.

It's true - there ain’t no romance, like a Disney romance and the 2015 adaptation of the classic Cinderella doesn’t disappoint. Staying absolutely true to the story, the movie maker didn’t muck up the tried-and-tested formula by adding any gimmick. Director Kenneth Branagh and screenwriter Chris Weitz have grounded this romantic tale with sincerity amid the dazzle. Perfectly cast, every character was easy to relate with. The beautiful Lily James (Lady Rose from Downton Abbey) as the humble, obedient, beauty wins over your heart from the very beginning. Cate Blanchett plays the evil stepmother effortlessly and brilliantly, along with her two awkward daughters, as the cruel step sisters.


In these fragile times that we live in, it is very important to remain positive, focused, optimistic and retain innocence. The arts, particularly movies often work as therapy. And watching Cinderella that evening along with my sisters and friends like sisters, proved to be a therapeutic session for me. Perhaps it would have also worked as a suitable alternative therapy for Andreas Lubitz.

We are our own monsters.

Yet another air calamity has hit the news with the Germanwings crash in the deep ravines of the French Alps. The devastation of this incident is compounded by the fact that the utterly young (27) co-pilot was in a distressed and disturbed state of mind and as a consequence, can be held responsible for ending his own life, along with that of the remaining 151 passengers on board the flight. Young people today have such bizarre mental activities. In India, little is known of clinical depression – what triggers it, how to treat it and what its possible repercussions maybe. Perhaps this horrific incident turns attention to this modern-day killer and raises awareness on how to identify it and help those suffering from it.